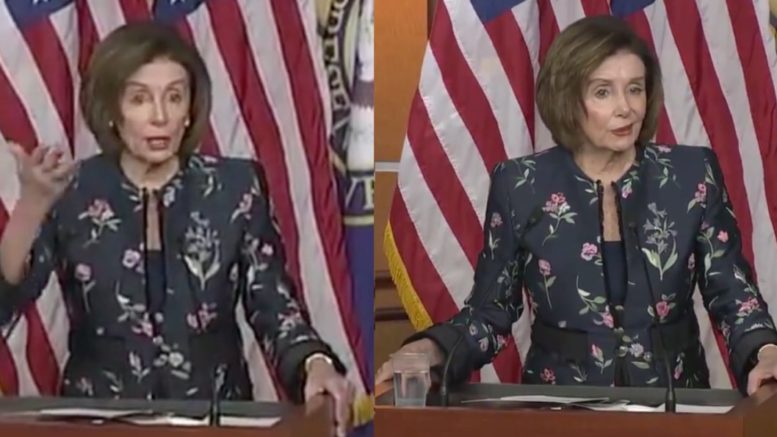 During on press conference on Thursday, House Speaker Nancy Pelosi (D-CA) alleged that President Trump’s impeachment team of lawyers have “trampled on the Constitution”, and suggested they may be disbarred.

She also went on to claim that the president will “not be acquitted” if the Senate votes not to convict him on the two articles charged by House Democrats, without bringing witnesses forward.

Washington Post congressional reporter Paul Kane asked Pelosi: “When [impeachment] is over in Washington, do you think President Trump will be chastened because he has a Congress watching him? Or will he be emboldened because the Senate will have acquitted him?”

Pelosi asserted that Republicans are “afraid of breaking a tie” with the Chief Justice, and then suggested the president doesn’t know “right from wrong”. (Continued Below)

House Speaker Pelosi praised her team of managers as “magnificent custodians of the Constitution”, but criticized the president’s lawyers claiming they are “there to dismantle the Constitution of the United States”.

“Article 2 does not say you can do whatever you want. The Constitution does not say that. But these… but these… [lawyers], I don’t know how they can retain their lawyer status in the comments that they’re making,” Pelosi told reporters. (Videos Below)

“Does the president know right from wrong? I don’t think so” https://t.co/eqjHUAEbAH pic.twitter.com/beLVPdNgU2

Republicans will have followed every Senate rule to acquit Trump and Pelosi has already declared him, "not acquitted."

Let's take back the House in 2020 and retire this idiot.

(Related: Jesse Watters: Is Pelosi “Just Trying To Pay Back Trump For Zeroing In On The Biden Family Shenanigans?”)