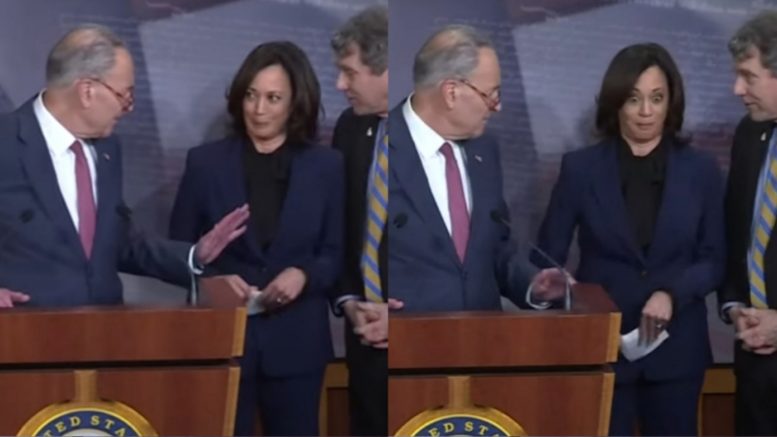 The incident took place after Kamala slammed GOP Senators for not wanting to subpoena documents and witnesses, which led her to declare that “this was not a fair trial.”

“Therefore, they can not walk out of this building and allege and assert that there has been a true acquittal. There will be no acquittal if there is not a fair trial,” Kamala said before walking off.

Once Schumer approached the podium, Sen. Harris was seen in the background grabbing Sen. Sherrod Brown’s lapel on his sport coat, laughing and not paying attention to what one of the reporters were asking.

Schumer immediately turned and stopped the commotion between Harris and Brown as he quietly uttered, “Come on, come on. Listen.”

Kamala reacted by giving Schumer an awkward look, crossed her arms and buttoned her mouth. Video Below

Related Article: Pelosi Claims Trump “Won’t Be Acquitted” If The Senate Votes Not To Convict Him On The Two Articles

Get a more clear look at the moment by fast-forwarding the following video to the 14:50 mark: