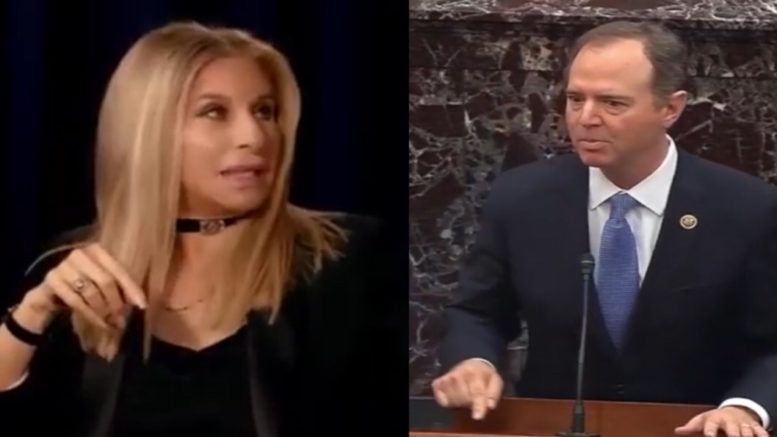 Singer and Actress, Barbra Streisand, took to Twitter Friday to openly praise House Intelligence Chairman, Adam Schiff (D-CA), who has been the forefront voice of the Democratic House managers in the ongoing impeachment trial in the Senate.

Streisand gushed over Schiff’s performance in trying to remove President Trump, claiming that “he speaks truth and would make a great president”.

Adam Schiff is so impressive,” Barbra Streisand expressed. “His knowledge of the law… his passion… his articulateness. His sincerity!”

“He speaks the truth and would make a great president,” she claimed.

(Related: Schiff Says He Has No Regrets On The ‘Russian Collusion Issue’ Or Making Up Trump’s Phone Transcripts)

Swamp Drain, however, has gathered a few examples of Adam Schiff “misleading the public”. (Continued Below)

Schiff, in a rebuttal memo, to counter the Nunes memo, insisted that the FBI and Department of Justice officials did not abuse the FISA (Foreign Intelligence Surveillance Act) courts or hide information from judges. But according to Horowitz, that is exactly what the FBI did.

Schiff also claimed that the FBI did not heavily rely on the so-called Steele dossier, which was paid oppo research against Trump by the Democratic Party and Hillary Clinton’s campaign. Horowitz said, however, that the FBI “heavily relied” on the garbage dossier, and even made up evidence to keep the dossier useful before the courts, though key officials knew that what was in it was not true.

Rep. Devin Nunes (R-CA) pointed out during a hearing in November that took place in the House Intelligence Committee that Schiff has spent the past three years scrounging for dirt that he could use against Trump. He was so desperate for opposition research that he even fell for a prank by a Ukrainian who offered him nude photographs of the president, making a mockery of the House Intelligence Committee in the process. (Continued Below)

He spent years repeatedly telling reporters that there was “more than circumstantial evidence” of collusion between Trump campaign officials and the Russian government. Then the Mueller Report exposed those assurances as mere partisan bluster, noted the Washington Examiner.

Schiff vehemently insisted that “we have not spoken directly with the whistleblower,” but was forced to acknowledge that his staff had, in fact, coordinated with the so-called whistleblower before the complaint that led to the current impeachment farce.

Schiff’s description of a hypothetical conversation between President Trump and Russian President Vladimir Putin during the Senate trial was the latest example to prove he is a “pathological liar” and a partisan, as Newt Gingrich put it.

“If the president went further and said to Putin in that secret meeting,” Schiff said on Friday. “I want you to hack Burisma, I couldn’t get the Ukrainians to do it. And I’ll tell you what, you have Burisma, and you get me some good stuff, then I’m going to stop sending money to Ukraine.”

Adam Schiff is so impressive. His knowledge of the law… his passion… his articulateness. His sincerity! He speaks the truth and would make a great president.

President Trump himself has repeatedly lambasted the Burbank Democrat over his remarks, calling him a “sick man!” for making up his conversation.

Rep. Adam Schiff totally made up my conversation with Ukraine President and read it to Congress and Millions. He must resign and be investigated. He has been doing this for two years. He is a sick man!

Related: Chris Wallace On Adam Schiff: “He Completely Misrepresented What Mick Mulvaney Said When He Said, ‘Get Over It‘”