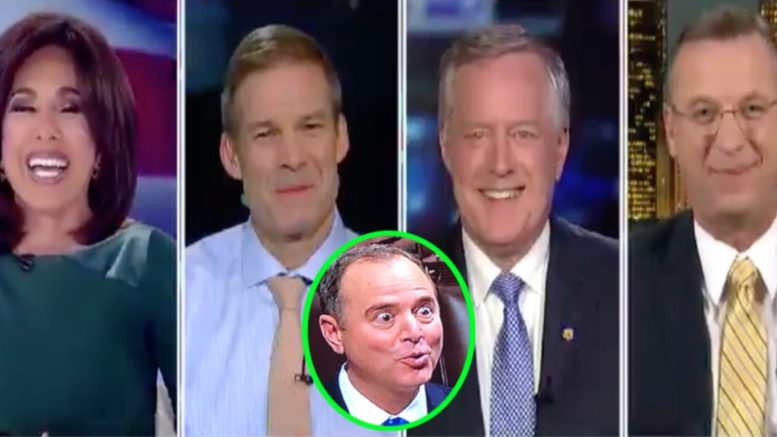 Saturday night on Fox News‘ “Justice”, Republican Congressmen Jim Jordan (OH), Mark Meadows (NC), and Doug Collins (GA) spoke with host Judge Jeanine Pirro to give their reactions to the ongoing impeachment trial in the Senate and what House Democrats have up their sleeves.

The Judge began by asking Rep. Mark Meadows if House manager Adam Schiff needs a lobotomy, to which the North Carolina Congressman replied, “They are works of fiction, Judge. What we have is Adam Schiff, not once but dozens of times, making up fictional narratives that he’s trying to sell to the American people and yet, they’re not buying it.”

“The other problem that we have with that is that it’s not over. [Schiff] is going to continue on. He’ll do it in his closing remarks indeed on Monday [in the Senate], and then, they will start all over again because they only know how to do one thing and that’s impune the reputation of this president, and try to replace their will for the will of the American people,” Rep. Meadows explained.

Judge Pirro switched the subject to Senator Chuck Schumer who claimed, “It’s not a real acquittal without witness” in the Senate. Ranking member of the Judiciary Committee Doug Collins responded: “That’s just a joke. They’ve run 17-0 witnesses and in fact, they still held back one transcript. They’ve never had a fair process and for them to have the audacity… to say this is not a fair trial with what came out of the House– the American people are not watching what is happening.”

“The sad part about it is when they do the makeup stories that Adam Schiff– the rants of Jerry Nadler, you have Chuck Schumer actually putting the integrity of the Senate on trial because that’s exactly what they want to do. They knew they didn’t have a case, so what they said was, ‘We’ll just say that the Republican Senators are the problem. They’re corrupt because we can’t make our case. We’ll just blame them.’ And that’s what they’re doing,” Rep. Collins explained.

The panel also laughed about the moment in the Senate trial when the closing remarks were about to be made, and Rep. Jerry Nadler (D-NY) jumped up appearing to steal the podium from Rep. Adam Schiff (D-CA). House manager Schiff could be heard saying, “Jerry! Jerry! Jerry!” (Continued Below)

Congressman Collins reacted to Schiff who tried to stop Nadler: “I’ve wanted to say that for a long time, for almost all of last year. I’ve wanted to say ‘Stop! Stop! Stop!’ It has just been one painful lie [and] statement after another–attacking this president, over and over. Chairman Nadler has built it up for over 30 or 40 years in fighting with President Trump– then it was developer Trump. It’s just been building up in him. He can’t stand that President Trump is successful and he’s done exactly what he said he’d do for the American people and that’s put them first.”

Asked about Schiff saying things that are not true, Rep. Mark Meadows responded, “The FISA application is all okay, or he has information on Russia collusion– listen, it goes on and on and on. We can keep complaining about it all day long, but here’s what I think we ought to do: We ought to put forth a rule in the House that you can’t impeach a president on strictly partisan lines. Let’s call it the Trump Rule–where never again does any president, whether it’s this president or any future president have to go through that.”

“We’ll be proposing that to make sure that my colleagues will never again use this as a weaponized tool to go after a sitting president,” he added. (Continued Below)

Asked if there is nothing that can be done to Schiff after all of his lies that he has engaged in repeatedly, Rep. Collins said, “Nobody wants to be around him, especially on our side because you just don’t trust him. [Democrats] have brought down the level of the standard of impeachment to a scary level. … They have also torn down the rules of the House so bad… they had one end in mind, they said they, ‘don’t care how we get there.’ We’ve got to raise the discourse back up to where the American people trust what we do and we put them first.”

“The Democrats have torn that down because they have no plan. They have no purpose and they have no way to win an election because Donald Trump’s gonna beat them. So what do they do? They try to tear him down instead of actually putting forward plans. They don’t have any because all they can do is fight against him,” Collins noted. (Video Below)

Rep. Meadows said that Speaker Nancy Pelosi (D-CA) and the Democrats will make-believe that none of this happened, adding, “More importantly, this is about Nancy Pelosi staying Speaker. Had she not done this, then she would’ve had a revolt from the progressives [be]cause they were gonna call on it, and they would’ve suggested that they get a new Speaker. This is about her power and her ability to stay in control,” he revealed.

Tonight @Jim_Jordan, @RepMarkMeadows and @RepDougCollins joined me with their reactions to the ongoing impeachment charade and much more– take a look: pic.twitter.com/ycovVlNsru

(Related: Judge Jeanine Pirro: “I Want To Thank Our Friends Pelosi, Schiff & Nadler For The Reelection Of President Trump In 2020”)