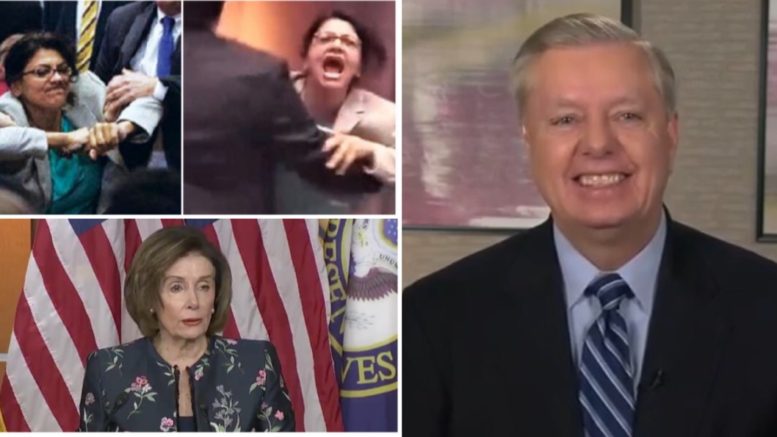 Senator Lindsey Graham (R-SC) spoke with Fox News’ Maria Bartiromo on “Sunday Morning Futures’ where he weighed in on the ongoing impeachment trial in the Senate that is reported to wrap up on Wednesday.

The Senate will hear closing arguments from the House impeachment managers and President Trump’s defense team on Monday with both sides getting two hours each, according to the resolution. The Senate would then adjourn the impeachment trial until 4 p.m. on Wednesday when they would move to final votes on the articles of impeachment, reported The Hill.

Senator Graham said the Senate is going to “turn the page on impeachment at 4 o’clock Wednesday”, adding that “All Republicans will vote not guilty. I think we’ll pick up a handful of Democrats.”

“I’m glad this trial is coming to an end. It’s the closest I ever want to be in being in purgatory. It’s been painful. It’s gonna end and we’re gonna turn the page and deal with the issues important to the American people. And the day of reckoning is coming for congressional and Senate oversight of Joe Biden and the FISA warrant process,” he warned.

Maria Bartiromo played a clip of Rep. Rashida Tlaib when she declared, “We’re gonna go in and impeach the mother f**ker!”. Bartiromo noted that Democrats have wanted to impeach President Trump for three years and asked, “This is not going to end, is it?”

“It will only end when the American people reelect Donald Trump in November and fire Nancy Pelosi and [Rashida] Tlaib for being in charge of the House,” Senator Graham recommended. (Continued Below)

“If you want to exonerate the president, the American people, and you want to deter future impeachments like this, make sure President Trump gets reelected and lets fire Nancy Pelosi. And what happened to the Nancy Pelosi that was thoughtful, prayerful, said impeachment could only be done by bipartisan?” the South Carolina Senator asked.

Bartiromo said that Nancy Pelosi is hinting at calling former National Security Advisor John Bolton to Congress if President Trump is acquitted in the Senate. Senator Graham fired back: “They are impeaching the president for suspending aid that was eventually received, trying to leverage an investigation that never happened. This is ridiculous.” (Video Below)

“Mueller broke their heart, they won’t let it go, they hate this man. Pelosi is no longer Speaker of the House, just in name only. I don’t know if they’ll ever let it go,” the Senate Judiciary Chairman expressed.

He then explained what he is going to do: “As they talk to Bolton, I’m gonna bring in State Department officials and ask them ‘Why didn’t you do something about the obvious conflict of interest Joe Biden had?’ Joe Biden’s effort to combat corruption in the Ukraine became a joke!” Senator Graham declared. (Continued Below)

Graham also revealed that in the coming weeks that he is going to call witnesses and the chief of staff to John Kerry about the conflict of interest with Hunter Biden being on Burisma.

“[Christopher] Heinz, the stepson of John Kerry was a business partner of Hunter Biden and Devon Archer. And he told the State Department, ‘I’m not part of this deal. I don’t think it’s right. George Kent told the State Department that it would be a conflict for Hunter to be on Burisma’s board. Let’s start there. Let’s call these people in. Eventually, we’ll get to Hunter Biden,” Graham said.

“I want to know why the Obama administration did nothing about this obvious conflict of interest. Joe Biden should’ve given up the Ukrainian portfolio, or Hunter Biden should be taken off the board because they ruined America’s ability to effectively deal with corruption in the Ukraine by having Hunter Biden on the board of Burisma. That’s just a fact and we’re gonna get to the bottom of it,” he stated.

Graham also said on the FISA abuse he is going to call Rod Rosenstein, Sally Yates, Andrew McCabe, James Comey. Under the Senate Intelligence Committee, they will call the whistleblower.

“We are going to get to the bottom of all of this to make sure it never happens again. Senate Intel will deal with the whistleblower. The foreign relations committee will deal with Joe Biden’s conflict of interest. The Judiciary Committee will deal with all things FISA. And let me tell Republicans out there: you should expect us to do this. If we don’t do it, we’re letting you down. I guaran-damn-tee you, if the shoe were on the other foot, Democrats would be eating us alive if Republicans had done any of these things,” he concluded.

(Related: Rubio: Dems Fell In Love With The Cameras & Forgot The Damage Impeachment Inflicts On The Country”