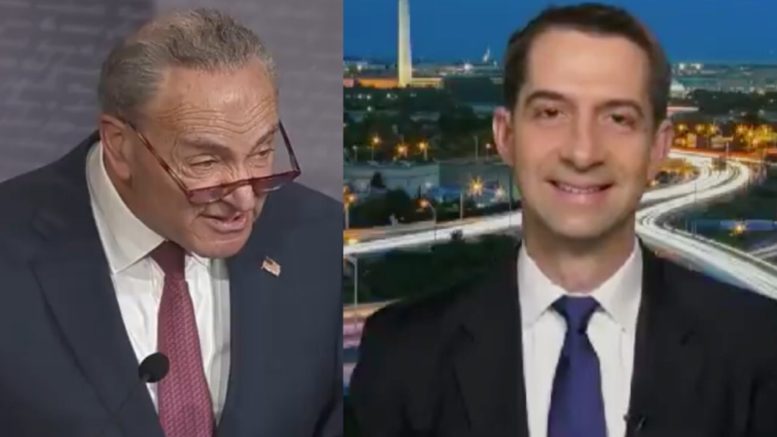 Asked about Senator Chuck Schumer’s remarks in which he called the impeachment trial a “sham” after the Senate voted to block witnesses, Senator Tom Cotton replied, “Good ole Chuck, Jeanine.”

When asked why he believes Schumer is trying to oust Senator Collins, the Arkansas Senator explained: “Chuck Schumer said from the beginning, he said it in the newspaper a couple of weeks ago, that this is a win-win situation for him. Either President Trump is removed from office, or he thinks it’s bad for Republican Senators who are in tough races like Susan Collins, or Cory Gardner, or Martha McSally.”

“This is for Chuck, about winning back the Senate majority, not about removing Donald Trump from the White House. He knew that he never had the votes to do that,” Senator Cotton stated. (Continued Below)

Judge Jeanine asked Senator Cotton if he is looking forward to hearing his fellow Senators this week on the Senate floor making remarks about the impeachment trial. “These last two weeks have been usual in more than one way in the United States Senate,” he said.

(Related: Judge Jeanine Pirro: “I Want To Thank Our Friends Pelosi, Schiff & Nadler For The Reelection Of President Trump In 2020”)

“One way in particular though was that all 100 Senators have had to sit silently at their desks. I can tell you for a lot of those Senators, that’s a form a shock therapy. They’re itching to get even 10 minutes of time to speak,” Senator Cotton expressed. (Video Below)

"I don’t think [Democrats] will ever surrender their goal of trying remove this President. " – @SenTomCotton discussing the latest in the impeachment trial and what's to come next: pic.twitter.com/hwoC0tjfvq

(Related: Mitt Romney “Formally Not Invited” To CPAC After Voting With Democrats To Hear Witnesses In The Senate Trial)