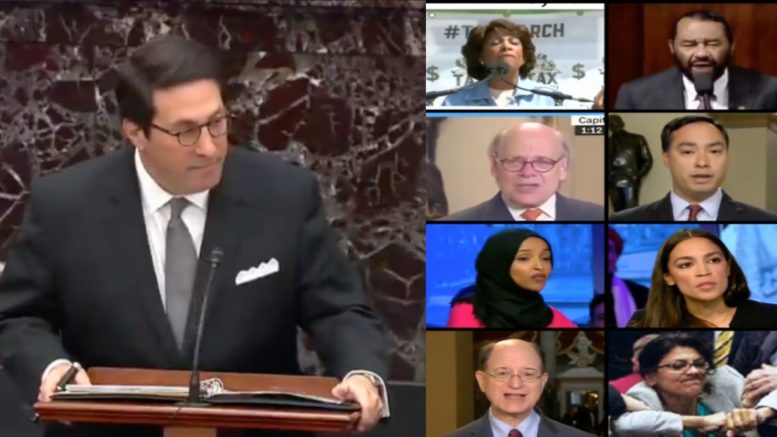 On Monday, President Trump’s defense team delivered closing arguments before the Senate will adjourn the impeachment trial until 4 p.m. on Wednesday when they will move to final votes on the articles of impeachment.

Jay Sekulow, chief counsel for President Trump, argued that both articles of impeachment sent to the Senate by House Democrats “fail to allege impeachable offenses”, and he exhibited with incriminating video clips, House Democrats who have called for the impeachment of the president since the day he swore into office.

“Both articles, one and two, must fail. This entire campaign of impeachment that started from the very first day that the president was inaugurated was a partisan one,” Jay Sekulow told the Senate. “And it should never happen again.”

“For three years, the push for impeachment came straight from the president’s opponents and when it finally reached a crescendo, it put this body, the United States Senate, into a horrible position,” Sekulow said as he proceeded to play clips of Democrats who have wanted to impeach the president from the beginning.

Jay Sekulow displayed an article to the Senate from The Washington Post, who on January 20, 2017, at 12:19 P.M., wrote “The Campaign to impeach President Trump has begun“, which was posted 19 minutes after President Trump was sworn into office.

“One of the members of the House of Representatives said, ‘We’re bringing these articles of impeachment so he doesn’t get elected again’. And here we are 10 months before an election doing exactly what they predicted,” Sekulow said after he played a clip of Democrats calling for impeachment.

“What this nation, what this president has just endured, what the House managers have just forced upon this great body, is unprecedented and unacceptable. This is exactly and precisely what the founders feared,” he stated.

“This was the first totally partisan presidential impeachment in our nation’s history and it should be our last,” Sekulow pointed out. “What the House Democrats have done to our nation, to the Constitution, to the office to the president, to the president himself, and to this body, is outrageous.” (Videos Below)

Jay Sekulow: the Democrat push to impeach the president started the day he took officehttps://t.co/Ivs7WGqBYb pic.twitter.com/uMjrUMIYzq

Jay Sekulow: “this was the first totally partisan presidential impeachment…it should be our last”https://t.co/QhqgITv0H1 pic.twitter.com/fc9xtyxdhd

(Related: Pat Cipollone Steps To The Podium & Rips Dems Case For Impeachment: “They Are Here To Steal Two Elections”)