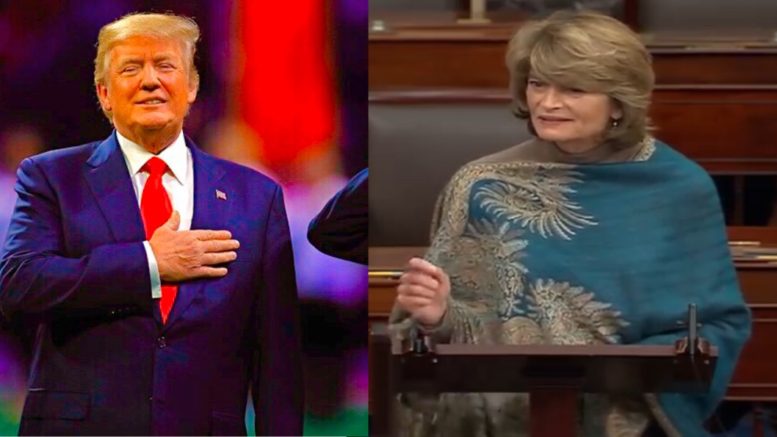 Senator Lisa Murkowski (R-AK) called for an end to partisanship on the Senate floor Monday and explained why she will vote to acquit President Donald Trump of the charges laid out against him from the Democratic-led House of Representatives.

“I cannot vote to convict, the Constitution provides for impeachment but does not demand it in all instances,” the Alaskan Senator announced. [Emphasis added].

Last week, Senator Lisa Murkowski voted against calling additional witnesses in the Senate trial because of the political motives she had said tainted the impeachment process. “The House chose to send articles of impeachment that are rushed and flawed. I carefully considered the need for additional witnesses and documents, to cure the shortcomings of its process, but ultimately decided that I will vote against considering motions to subpoena,” she said in a statement on Twitter.

Speaking on the Senate floor Monday, Senator Murkowski said she worked to secure a “fair, honest and transparent structure” for the impeachment trial, but the foundation of the charges against President Trump were “rotted.”

“The House rushed through what should have been one of the most serious, consequential undertakings of the legislative branch, simply to meet an artificial, self-imposed deadline,” she said.

Senator Murkowski explained that previous impeachment trials were much more robust in terms of the evidence they considered. “The House failed in its responsibilities,” she stated. (Continued Below)

“And the Senate should be ashamed by the rank partisanship that has been on display here. We cannot be the greatest deliberate body when we kick things off by issuing letters to the media instead of coming together to set the parameters, the trial and negotiate in good faith on how we should proceed. And for all the talk of impartiality, it is clear to me that few in this chamber approached this with a genuinely open mind,” Senator Murkowski vented.

“Some have been calling for the president to be impeached for years,” she pointed out, then referred to a video that Jay Sekulow, chief counsel for President Trump, had played while he delivered closing arguments. The video he displayed showed House Democrats, who have called for the impeachment of the president since the day he swore into office.

“Over the course of the past few weeks, we’ve all seen the videos from 20 years ago, where members who were present during the Clinton trial took the exact opposite stance than they take today,” the Alaska Senator pointed out of the Democrats. “That level of hypocrisy is astounding.” (Continued Below)

“All of this rotted foundation of the process, all of this led to the conclusion that I reached several days ago that there would be no fair trial. … For half the country, they’d already decided. … They considered the entire impeachment inquiry to be baseless and they thought that the Senate should just have dismissed the case as soon as it reached us. And for the other half, no matter how many witnesses were summoned or disposed, no matter how many documents were produced, the only way the trial could have been considered fair was if it resulted in the president’s removal from office,” she said.

Murkowski railed against Democrats’ motives when they held the articles back from the Senate for a month, saying the “outcome became clear”, adding, “A careless media cheerfully tried to put out the fires with gasoline. We debated witnesses instead of the case before the Senate, rather than the president’s conduct. The focus turned to how a lack of additional witnesses could be used to undermind any final conclusion.”

“And what started with political initiatives that degraded the office of the president, and left the Congress wallowing in partisan mud, it threatened to drag the last remaining branch of government down along with us,” she vented.

“When it became clear that a tie vote here in the Senate would simply be used to burn down our third branch of government for partisan, political purposes, I said, ‘Enough. Just enough,'” Senator Murkowski expressed. [Emphasis added.] (Video Below)

Senator Murkowski, however, does not agree with the president’s “behavior”, but she sees through the partisan impeachment the House Democrats have led.

“The response to the president’s behavior is not to disenfranchise 63 million Americans and remove him from the ballot. The House could have pursued censure and not immediately jumped to the remedy of last resort. I cannot vote to convict. The Constitution provides for impeachment, but does not demand it in all instances,” she declared. [Emphasis added].

“The president’s name is on ballots that have already been cast. The voters will pronounce a verdict in 9 months, and we must trust their judgment,” the Alaskan Senator urged. [Emphasis added].

(Related: Eric Herschmann On Schiff’s Version Of The Transcript: “Mob, Gangster-Like Fake Rendition Of The Call”)