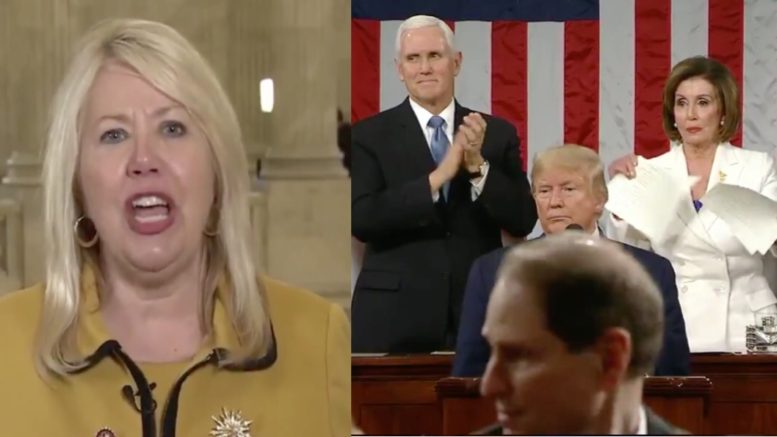 House Speaker Pelosi (D-CA) tore up President Trump’s speech Tuesday night, as he ended his State of the Union address in the chamber of the US House of Representatives at the US Capitol Building in Washington D.C.

NBC News’ Frank Thorp reported that Pelosi told reporters she ripped up the speech because “it was the courteous thing to do, considering the alternative.”

After the SOTU was over, the White House tweeted Tuesday night on Twitter: “Speaker Pelosi ripped up: One of our last surviving Tuskegee Airmen. The survival of a child born at 21 weeks. The mourning families of Rocky Jones and Kayla Mueller. A service member’s reunion with his family. That’s her legacy,” referencing special guests invited to attend the address.

(Related: Pres Trump Gives Pelosi The Cold Shoulder As She Reaches Out For A Handshake At SOTU)

Rep. Debbie Lesko (R-AZ) told Newsmax: “The worst part of this thing was when Speaker Pelosi at the end, when President Trump was wrapping this up, tears up his speech. I could not believe it. People around me could not believe the vitriol.”

“This is not what the American people want,” Rep. Lesko expressed. “The American people want us to try to work together. And instead, she shows that she is not willing to work with us at all–she tears up… I mean, how rude! How, just unconscionable. We were just shocked. The people around me were just absolutely shocked– the low-less she has dropped to.” (Video Below)

.@SpeakerPelosi tears up of State of the Union speech.#SOTU #SOTU2020 pic.twitter.com/sIpi4G7KsL

"The worst part of this thing was when @SpeakerPelosi… tears up his speech. I could not believe it," @RepDLesko tells Newsmax TV.

"How rude, how, just, unconscionable. We were just shocked." #SOTU https://t.co/VlT7z8drtO pic.twitter.com/IpVHLrZ5kr

We leave you with a few other responses:

Disgusting display and totally disrespectful. Don’t worry the voters will send their message to @SpeakerPelosi in November. 4 More Years of @realDonaldTrump. https://t.co/3K1MkrnfPv

And right on cue, @SpeakerPelosi tears up the speech in front of the whole nation, a defeated villain, throwing a childish tantrum. #SOTU #USA https://t.co/C1xl9jWCOb

After a tremendously powerful moment looking ahead optimistically, Trump finishes. Pelosi stands, holds up her copy of the speech, tears it in half emphatically. The Speaker just said screw you to military spouses, serving military, children, minorities, women.