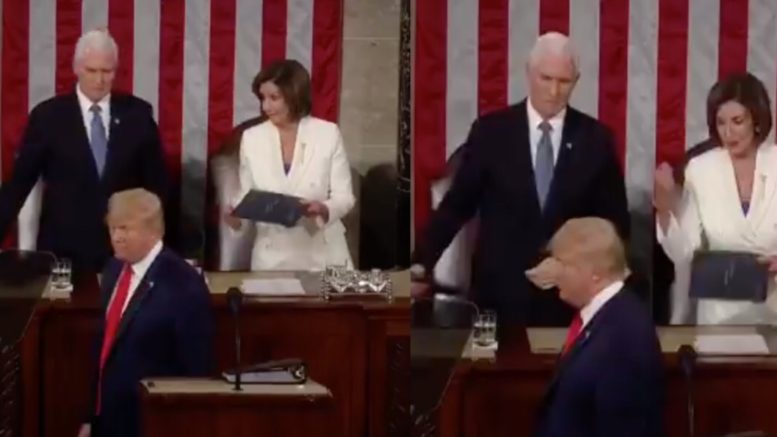 As President Trump entered the chamber to deliver the State of the Union Tuesday evening, he walked down the aisle greeting lawmakers and shaking hands.

When the President took to the podium for his address, he handed Vice President Mike Pence and House Speaker Nancy Pelosi (D-CA) a copy of his speech, then it appeared Pelosi got the cold shoulder from the Commander in Chief.

House Speaker Nancy Pelosi had reached out to shake hands with President Donald Trump moments before his State of the Union address, and just after trying to impeach him.

President Trump, however, turned away without shaking her hand to proceed to begin with the formal address.

It is not clear whether the president intended to reject the gesture, but social media appeared to think she deserved it.

As he walked to the podium for his address, President Trump did not shake Speaker Nancy Pelosi's hand, although it was unclear whether it was an intentional snub https://t.co/UOJyqNXas1 pic.twitter.com/hxW5J0LKib

Meanwhile, he has led the Great American Comeback and restored the United States of America to greatness

She has opposed him every step of the way

She doesn't deserve a handshake pic.twitter.com/Q1MFefkMcL

Your impeachment scam just failed, Trump’s support is now at an all-time high, he leaves you hanging on a handshake, & now you have to listen to him name every accomplishment over the most successful 3 years in our country’s history. 😂

I added the Black Eyed Peas to Trump's entrance and it makes is 10x better and syncs perfectly all the way to the end when he straight up denies Nancy Pelosi's handshake: pic.twitter.com/OhF5ITJVDJ