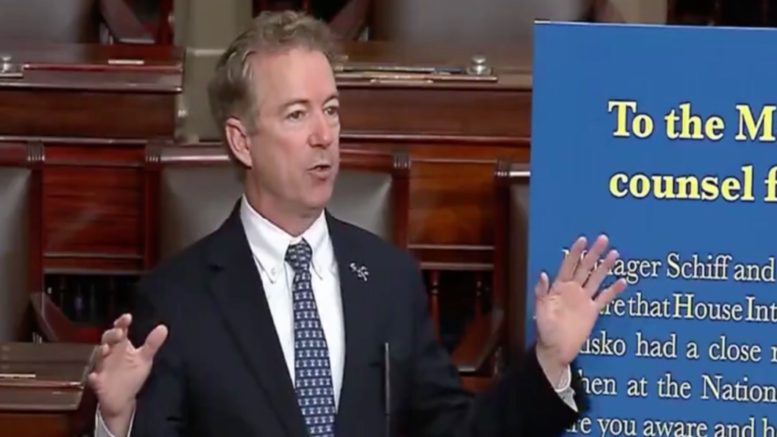 Wednesday on the Senate floor, Senator Rand Paul (R-KY) slammed the “overzealous protection” that prevented him from asking a question during the Senate trial, which pertained to the alleged whistleblower and Sean Misko, a staffer of Rep. Adam Schiff. Misko and the WB had a close relationship while working together at the National Security Council and they reportedly had been overheard talking about impeaching the president in the first month of taking office.

The whistleblower filed a complaint in August with an intelligence community watchdog, Inspector General Michael Atkinson. The complaint, which cited widespread concerns inside the Trump administration, alleged that Trump appeared to pressure Ukraine’s president to launch politically motivated investigations of his Democratic rivals, reported Politico.

Atkinson indicated that the whistleblower showed “some indicia of an arguable political bias” but after reviewing the complaint and deemed it “urgent” and credible, triggering a requirement to transmit the complaint to Congress. The director of national intelligence, though instead, forwarded the complaint to the Justice Department, which overruled Atkinson’s judgment and blocked the complaint from reaching the House and Senate Intelligence Committees, as per Politico.

In September, House Intelligence Chairman Adam Schiff (D-CA) subpoenaed for the document and received it two weeks later, when DNI Joseph Maguire testified about it before Congress. Schiff later acknowledged that his staff had been in contact with the whistleblower prior to his complaint to the inspector general. 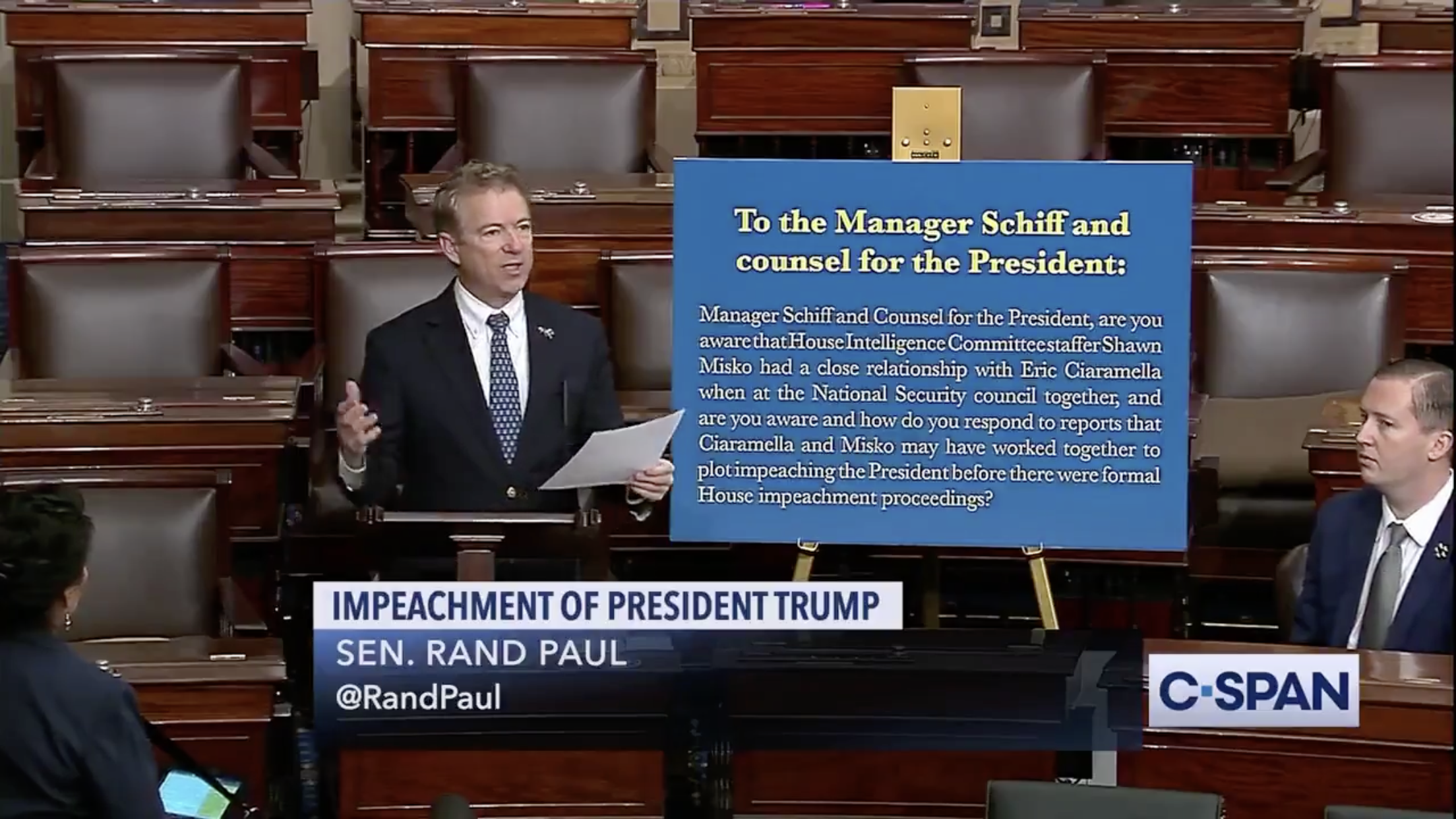 “We’re now finding out that the FISA application was predicated upon 17 lies by the FBI, by people at high levels that were biased against the president. And it turns out it was an illegitimate investigation,” the Kentucky Senator said of the FISA report, released in December from DOJ Inspector General Michael Horowitz. “Everything they did about investigating the president was untrue and abused government, to do something [that] never should’ve done in the first place.”

“Here’s my question: ‘Are you aware that the House Intelligence Committee staffer Sean Misko had a close relationship with Eric Ciaramella while at the National Security Council together? And are you aware and how did you respond to reports that Ciaramella and Misko may have worked together to plot impeaching the president before there were formal House impeachment proceedings?‘” he asked.

“Why did I ask this question?” Senator Rand Paul asked. “Because there are news reports saying these two people, one of them who works for Adam Schiff, and one of them who worked with this person at the National Security Council, that they knew each other and had been overheard talking about impeaching the president in the first month of his office– in January 2017. They were already plotting the impeachment.” (Continued Below)

Senator Rand Paul explained that the law does not preserve anonymity for the protection of the whistleblower. “His boss is not supposed to say anything about him, he’s not supposed to be fired,” he said.

“I think the question is an important one and I think we should still get to the bottom of it. Were people plotting to bring down the president? They were plotting in advance of the election. Were they plotting within the halls of government to bring down the president? These people also knew the Vindman brothers, who are still in government. You’ve got two Vindman brothers … who know Eric Ciaramella, who also knows Sean Misko, who also knew two other people working on Adam Schiff’s staff,” Senator Paul explained. (Video Below)

“How am I prevented from asking a question when nobody seems to admit that they know who this person is? My point is: by having such protections, such overzealous protection, we don’t get to the root of the matter of how this started. [Be]cause this could happen again. When the institution of the bureaucracy, when the intelligence community with all the power to listen to every phone conversation you have has political bias and can gain the system to go after you, that’s a real worry,” Senator Rand Paul said. [Emphasis added].

“It’s a real worry that they spied on the president. But what if you’re you’re an average, ordinary American? What if you’re just a supporter of President Trump? Or you’re a Republican or a Conservative? Are we not concerned that secret courts could allow for warrants to listen to your phone calls, to tap into your emails, to read your text messages? I’m very concerned about that. It isn’t really about the whistleblower so much, it’s about reforming government. It’s about limiting the power of what they can do as secret courts,” he added.

On the floor of the U.S. Senate, Sen. @RandPaul reads and displays the question which Chief Justice Roberts declined to read last week during the Impeachment Trial. pic.twitter.com/nxZb255IbU