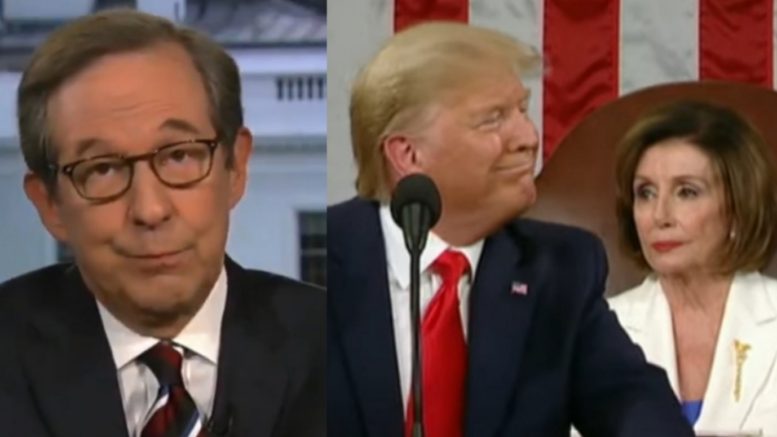 In reaction to the the Senate voting to acquit President Trump, Fox News host Chris Wallace suggested that President Donald Trump is “better off now” than he was before the impeachment process began.

To back up his remarks, Wallace referenced President Trump’s latest job approval rating (49%), which is his highest in Gallup polling since taking office in 2017. The poll was released the day before the Senate voted down both articles of impeachment.

Related Article: Pres Trump Responds As Senate Votes To Acquit Him On Both Articles Of Impeachment: “I Will Be Making A Public Statement Tomorrow”

“As far as the political impact, I think you’d have to say that Donald Trump is better off now than he was when this impeachment process began,” Wallace indicated.

“He’s had a number of bipartisan successes on trade deals, the economy is rolling along,” he mentioned.

“The Gallup poll just came out. It’s the highest he’s had in his presidency — 49 percent,” Wallace added. Video Below

Here are some more reactions from members of the media regarding fallout from the President’s acquittal and his best approval rating to date:

Mollie Hemingway: Democrats need to “deal with the reality” that President Trump came out of impeachment “stronger”https://t.co/tiQcsHLdBs pic.twitter.com/n6Roqre1HF

ABC News’ Jonathan Karl: President Trump’s “approval ratings right now are as high as they have ever been”https://t.co/2DSXMS7izg pic.twitter.com/JYiOuSipQ7