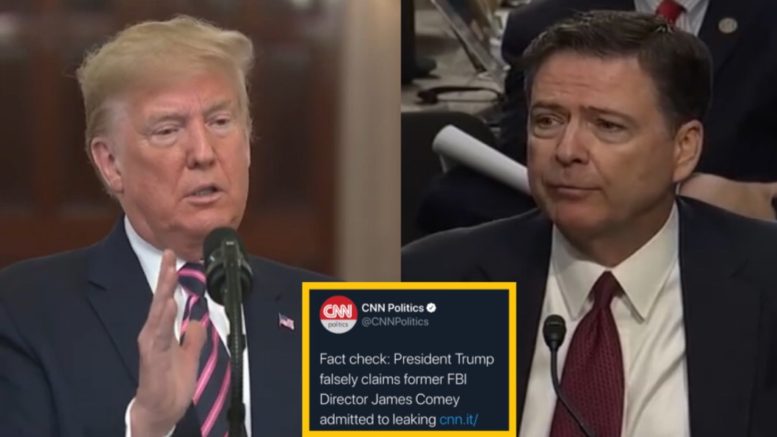 Thursday, President Trump declared victory after the Senate voted to acquit him Wednesday over two impeachment articles from the Democratic-led House, which he called the process, “all bullsh*t.”

After two years of the Mueller investigation and nearly six months of impeachment, President Trump took to the East Room in the White House to express his gratitude to Republican lawmakers and his counsel for their support and defense, and unloaded on the “dirty cops”, specifically former FBI Director James Comey, along with other Obama-era officials, for trying to take him down.

President Trump said on Thursday: “We’ve been doing this now for over three years. It was evil, it was corrupt, it was dirty cops, it was leakers and liars.”

“This should never, ever happen to another president, ever,” the president expressed. “I don’t know if other presidents would be able to take it…It was a disgrace. Had I not fired James Comey, who was a disaster, by the way, it’s possible I wouldn’t have been standing here right now. We caught him in the act. Dirty cops. Bad people. If this would have happened to President Obama a lot of people would have been in jail already– many, many years.”

The President also said that after he fired James Comey “all hell broke out”, calling him a “sleaze bag”, adding, “They were ratting on each other, running for the hills. Let’s see what happens. It’s in the hands of some very talented people. … But I can tell you in my opinion, these are the crookedest, most dishonest people.”

James Comey had testified that he orchestrated the leak of accounts of conversations with President Donald Trump because he thought it might lead to the appointment of a special prosecutor to lead the Russia investigation. Comey said he had asked a friend at Columbia University to leak the content of one of his memos, reported CNN in Jan. 2017.

[Comey] said that it dawned on him that there could be corroboration of a memo that he wrote after the President tweeted that he better hope there were no White House tapes of their conversations. “My judgment was that I needed to get that out into the public square,” he said, as per CNN. Comey added he took the step “because I thought that might prompt the appointment of a special counsel.” He also at one point had told senators, “Lordy, I hope there are tapes.” (Videos Below)

In August 2019, the Department of Justice Inspector General, Michael Horowitz, released a report pertaining to former FBI Director James Comey after he “leaked material to the press.”

The IG report said that Comey “violated standard procedures” during his time in the Trump administration; stating he set a “dangerous example” for the over 35,000 current FBI employees—and the many thousands more former FBI employees— who similarly have access to or knowledge of non-public information.

“Had I not fired James Comey, who was a disaster by the way, it’s possible I wouldn’t even be standing here right now. We caught him in the act.”pic.twitter.com/GCrvkaREFG

POTUS TIPS HIS HAND
♥️♣️♦️♠️♥️♣️♦️♠️
⚖⚖⚖⚖⚖⚖⚖⚖
"THEY WERE RATTING ON EACH OTHER, THEY WERE RUNNING FOR THE HILLS"@realDonaldTrump explaining what happened after he fired Comey#PAIN #PanicInDC #QAnon pic.twitter.com/lmyUoVj8fp

Several people chimed in to respond to CNN’s Thursday tweet about James Comey, to which the cable network instantly got roasted:

You clowns have to be kidding me at this point. Do you even try to fact check things before you write your narrative? When will you retract your lies? https://t.co/cwlDQ0me0Y pic.twitter.com/i5mMvWLmOM

“(CNN) Former FBI Director James Comey testified Thursday that he orchestrated the leak of accounts of conversations with President Donald Trump because he thought it might lead to the appointment of a special prosecutor to lead the Russia investigation.” https://t.co/DuKEp7e4gp pic.twitter.com/Sd50PNPptn

I think @CNNPolitics needs to go back and read through Comey’s testimony – oh and the IG report 😊 https://t.co/uoXcI3ZDdf