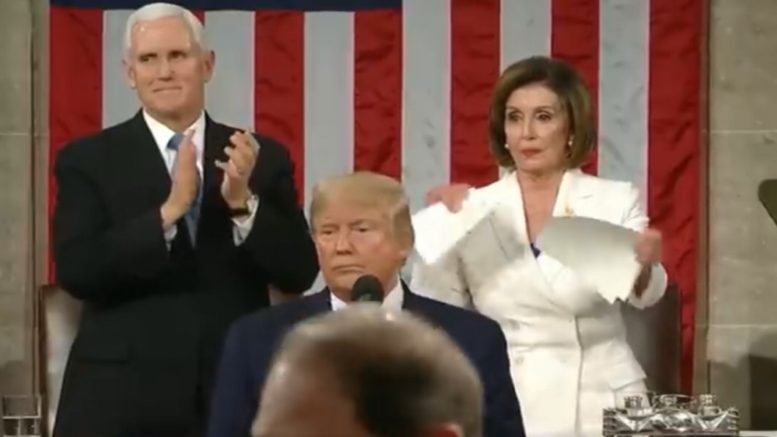 House Democrats on Thursday voted down a GOP resolution to condemn House Speaker Nancy Pelosi (D-CA) after she tore up President Trump’s State of the Union speech Tuesday night.

On Wednesday, Rep. Matt Gaetz (R-FL) announced that he planned to file an ethics charge against Pelosi, claiming “a potential violation of law” by Pelosi.

The privileged resolution was introduced under Rule 9 of the standing rules of the House. Rep. Kay Granger (R-TX) led the efforts of the resolution condemning the House Speaker’s actions.

“Speaker Pelosi’s actions last night were appalling and shameful,” Rep. Granger said in a statement on Wednesday.”Regardless of her personal feelings, she had a responsibility to conduct herself with civility as the presiding officer representing the House of Representatives. She is not the Speaker of the Democrats, but of the People’s House.”

The measure was rejected in a 224 to 193 party-line vote, with all Democrats voting against it and all Republicans voting in favor of it.

GOP lawmakers have characterized her actions as “a breach of decorum” and accused her of disrespecting the guests the president honored at the annual event. Several Republicans, including House Minority Whip Steve Scalise (La.) and House Republican Conference Chairwoman Liz Cheney (Wyo.), have called on Pelosi to apologize, as reported by The Hill. (Continued Below)

On Thursday during a press conference, Speaker Pelosi defended her actions of ripping up the SOTU speech, claiming “It was necessary and courteous”.

“I tore up a manifesto of mistruths,” she told reporters. “It was necessary to get the attention of the American people to say, ‘This is not true. And this is how it affects you.’ And I don’t need any lessons from anybody, especially the president of the United States, about dignity.”

“Is it okay to start saying, ‘four more years’ in the House of Representatives?” Pelosi asked criticizing Republicans. “It’s just unheard of,” she said, adding that it was the “courteous thing to do,” to rip up the SOTU speech. (Video Below)

Speaker Nancy Pelosi’s official remarks over the SOTU speech she ripped up:

Pelosi often counsels her members to be dignified in dealing with the president, so I asked her if tearing up the SOTU speech stepped on that message."No," she said, adding: "I don't need any lessons from anybody, especially the president of the United States, about dignity." pic.twitter.com/jNe7lTQHh6