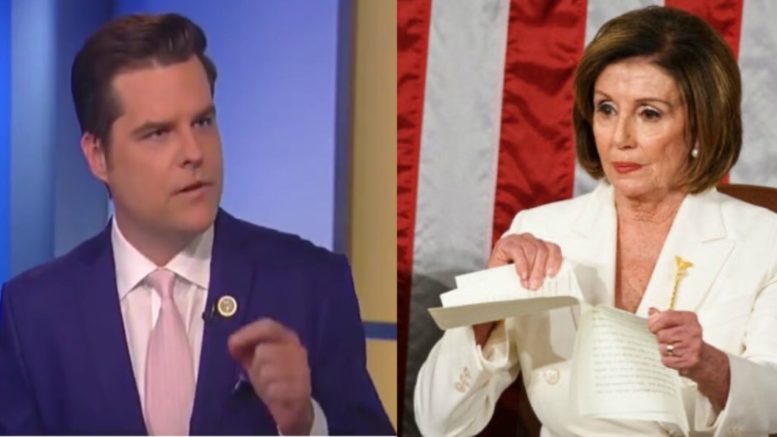 Congressman Matt Gaetz (R-FL) told Laura Ingraham on Fox News’ “The Ingraham Angle”  Wednesday, that he will be filing ethics charges against House Speaker Nancy Pelosi (D-CA) over what he called her “temper tantrum” when she tore-up President Trump’s State of the Union Address Tuesday evening.

Gaetz said that he will file the charges with the House Ethics Committee on Thursday.

“I will be filing charges against Nancy Pelosi in the House Ethics committee. She disgraced the House of Representatives, she embarrassed our country, and she destroyed official records. The law does not allow the Speaker of the House to destroy the records of the House, and the rules of the House do not permit some little temper tantrum just because you don’t like what the president of the United States says,” Rep. Matt Gaetz expressed.

The Florida Congressman also emphasized that he is one of many Republicans who are tired of political double standards on Capitol Hill, pointing to Rep. Joe Wilson (R-SC), who was reprimanded in 2009 for yelling out “You lie!” when former President Obama claimed illegal immigrants would not be covered by ObamaCare.

“The Democrats really brought the heat down on him,” Gaetz said, adding: “By the way, Joe Wilson was right. We ought to apply the same standards to the Democrats that they want to apply to us, and there will be an ethics investigation to Nancy Pelosi and we will start the ball rolling to have her censured, and the first act tomorrow when Congressman Zeldin and I will join Kay Granger in a censor resolution to and we will force a vote on that resolution.” (Continued Below)

Rep. Lee Zeldin told Laura Ingraham that Pelosi “should be censured”, adding, “It was a disgrace, it was an embarrassment”.

“Basically from the inside out, Nancy Pelosi has been poisoned. She is now poisoning the House of Representatives and Congress and our country. It started off getting rolled by her far-left, which has basically taken over the Democratic Party,” Rep. Zeldin said.

Rep. Gaetz said that Pelosi has “some real impulse control problems,” also adding, “She is the first Speaker of the House of Representatives to have her words taken down by the House of Representatives because she was too personal in her attacks against the president, which were unfounded”, he said referring to July comments Pelosi had made on the House floor of President Trump that became personal. (Video Below)

The White House had quickly released a statement on Twitter to Pelosi’s act of tearing up the State of the Union speech: “Speaker Pelosi just ripped up: One of our last surviving Tuskegee Airmen. The survival of a child born at 21 weeks. The mourning families of Rocky Jones and Kayla Mueller. A service member’s reunion with his family. That’s her legacy,” in reverence to individuals whom President Trump mentioned during his address.

.@RepMattGaetz says he will be filing ethics charges against Speaker Pelosi for destroying “official records” when she tore up Pres. Trump’s #SOTU  speech
pic.twitter.com/xurHHsERbI

BREAKING: I'm filing an ethics complaint against @SpeakerPelosi for destroying @realDonaldTrump's State of the Union speech.

Her conduct was beneath the dignity of the House, and a potential violation of law (18 USC 2071).

Nobody is above the law. She must be held accountable. pic.twitter.com/dXPPWQNtI8