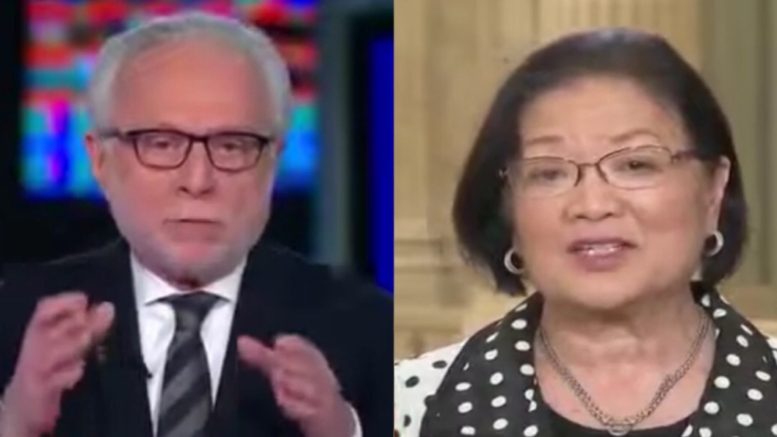 Senator Mazie Hirono (D-HI) spoke with CNN’s Wolf Blitzer on Thursday where she reacted to President Donald Trump being acquitted in the Senate.

Hirono, however, claimed the president is a “petty, vindictive, spoiled brat” and that he was not acquitted because it was a “rigged trial,” but Blitzer interjected to correct her.

Senator Hirono disagreed with Blitzer’s statement. “He wasn’t acquitted. It was a rigged trial,” she claimed.

“You don’t get acquitted when you don’t even get to call witnesses or relevant witnesses or have the documents, because the president stonewalled all efforts, on the part of the House, to get the information that they requested. So there you go. It was a rigged trial,” Senator Hirono said.

“He can run around saying he was acquitted, but you don’t get acquitted in a rigged trial,” she asserted. (Continued Below)

Wolf Blitzer stopped Senator Hirono from making false statements about the President after he was acquitted.

“I just want to point out Senator, there was a roll call: guilty or not guilty. Not guilty was the majority, and the Chief Justice of the United States announced that he was acquitted, that he was not guilty,” Blitzer informed Senator Hirono.

“But the American public knows that it was a rigged trial,” the Hawaiian Senator insisted. “So… okay. You’re found not guilty in a rigged trial.” (Video Below)

“So meanwhile, you have the president crowing about it, which is totally expected. And now, anything goes for this president and this administration and all his enablers. They’re sitting there congratulating each other when we know full well that he’s gonna do some other vindictive, harmful thing,” Senator Hirono added.

Sen. Mazie Hirono just claimed Trump was not acquitted because it was a "rigged trial."

CNN's Wolf Blitzer had to jump in and correct her:

"The Chief Justice of the United States announced that he was acquitted, that he was not guilty."

Hirono then doubled down.