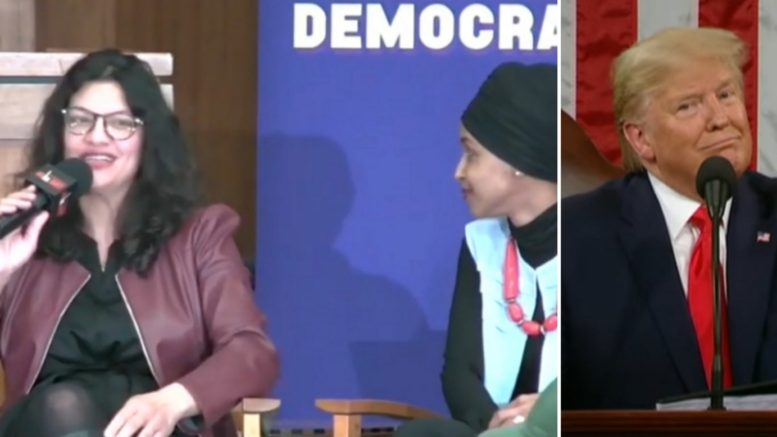 Congresswomen Rashida Tlaib publicly admitted that she and Rep. Ilhan Omar had to hold hands while watching President Trump deliver the State of the Union address to get through “moments of triggering”.

Tlaib briefly opened up on the situation while speaking along with all four “squad” memberss Washington event for progressive activists called The Rising Majority, as per Fox News.

“You know, I think it was a huge struggle for me because I don’t think people realize it’s worse when you’re actually there,” Tlaib said.

She then looked at Rep. Omar and told her, “There was moments of triggering, and I kept holding your hand, and we intentionally sat next to each other to support each other.”

Reps Omar and Tlaib, who wore traditional Somali and Palestinian outfits to the address, failed to stand when the last surviving Tuskegee Airman was introduced by President Trump. The move by the Congresswomen came moments before House Speaker Nancy Pelosi ripped up the President’s speech.

We leave you with video footage that appears to show Tlaib and Omar refusing to stand for Tuskegee Airman Brig. Gen. Charles McGee.

Looks like nearly everyone else stood, except for those two, who didn't want to honor a US hero. (At very end) pic.twitter.com/XfOp9B0nSN