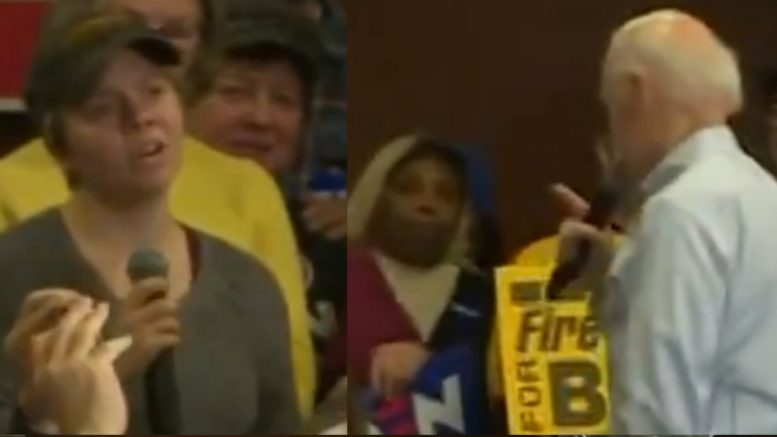 The young woman introduced to herself as “Madison” and said she was an “econ student” at a university, before she questioned Biden about his poor results from the Iowa caucus.

Related Article: Sarah Sanders: Joe Biden “May Be Calling His Son Hunter & Borrowing Money From Him To Fund His Campaign”

“How do you explain the performance in Iowa and why should the voters believe that you can win a national election?” the female student asked.

Biden replied, “That’s a good question. Number one, Iowa’s a Democratic caucus. You ever been to a caucus?”

After the woman said that she has, Biden quickly replied, “No you haven’t. You’re a lying dog-faced pony soldier.” Video Below

After a New Hampshire voter asks @JoeBiden why they should trust he can turn his campaign around, he asks if she’s ever been to a caucus before; when she says yes, Biden snaps: "No you haven’t. You’re a lying dog-faced pony soldier." pic.twitter.com/3uxOAu0Ues

At the same event, Biden vowed to “take away” some of President Trump tax cuts and suggested people who are forced out of work by his policies will need to go to community colleges to be “retrained.”

We leave you with those videos:

Joe Biden: people forced out of work by my policies need to go to community colleges to be "retrained"https://t.co/ePHKsDjpet pic.twitter.com/4RtCANpaS8