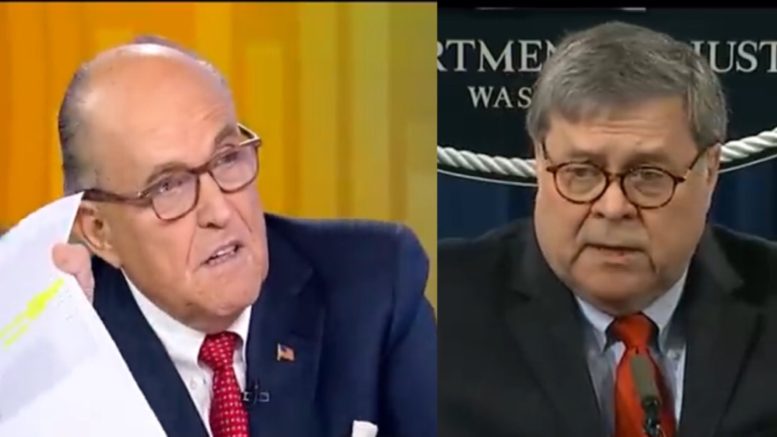 Attorney General William Barr confirmed, during a press conference Monday, that the Justice Department is examining potential information about Ukraine from President Trump’s personal attorney Rudy Giuliani and others through an “intake process” to determine its credibility.

“The DOJ has the obligation to have an open door to anybody who wishes to provide us information that they think is relevant,” the Attorney General told reporters.

“But as I did say to Senator [Lindsey] Graham — we have to be very careful, with respect to any information coming from the Ukraine,” Attorney General Willaim Barr warned.

He explained that there are “a lot of agendas” in Ukraine and “a lot of cross currents.”

“We can’t take anything we receive from the Ukraine at face value,” Attorney General Barr said. “For that reason, we had established an intake process in the field so that any information coming in about Ukraine could be carefully scrutinized by the department and it’s intelligence community partners, so we can assess its provenance credibility.”

He added: “And that is true for all information that comes to the department relating to the Ukraine, including anything Mr. Giuliani might provide.” (Continued Below)

On Sunday, Senate Judiciary Committee Chairman Lindsey Graham (R-SC) described the Justice Department’s methods for verifying information gathered in Ukraine by Giuliani, who has claimed to have information related to former Vice President Joe Biden and his son Hunter Biden.

“Rudy Giuliani is a well-known man,” Graham said on CBS’s “Face the Nation”. “He’s a crime fighter. He’s loyal to the president. He’s a good lawyer,” adding “If Rudy Giuliani has any information coming out of the Ukraine, he needs to turn it over to the Department of Justice because it could be Russian propaganda.”

Rudy Giuliani told Fox News’ Maria Bartiromo on Sunday that nobody has ever looked at the information about the Bidens. “I have four witnesses who say that for four years, they’ve been trying to get information brought to the Justice Department and the FBI,” he said. (Video Below)

Rudy Giuliani lays out the Biden’s corruption in Ukraine in an interview with Maria Bartiromo:

.@LindseyGrahamSC reacts to @RudyGiuliani: “I’m not going to be the Republican Christopher Steele” Adds, that he's "not sure" if Giuliani is getting played by Russia. WATCH –> pic.twitter.com/4mljoFFxdV

After speaking with AG William Barr, @LindseyGrahamSC issues a warning to U.S. politicians, saying they should be careful if they receive information from foreign governments including Ukraine. https://t.co/6mRyLyWIju pic.twitter.com/OBqdkmQxsw