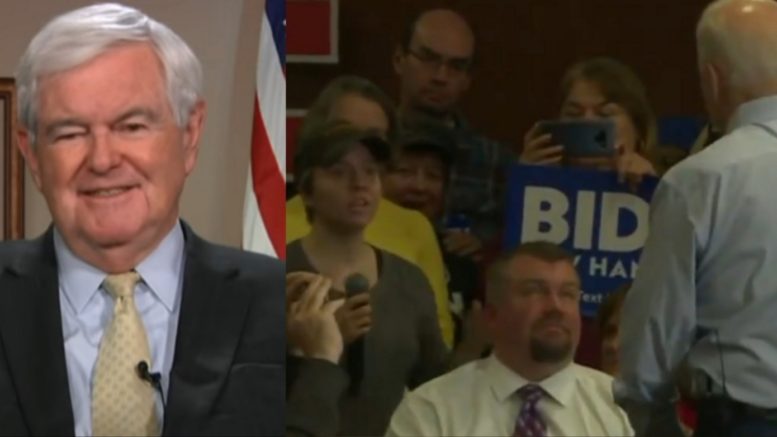 The awkward exchange took place after the student, who introduced herself as “Madison,” asked Biden, “How do you explain the performance in Iowa and why should the voters believe that you can win a national election?”

Biden replied, “That’s a good question. Number one, Iowa’s a Democratic caucus. You ever been to a caucus?” After the woman said that she has been to the Iowa caucus, Biden quickly replied, “No you haven’t. You’re a lying dog-faced pony soldier.”

After a New Hampshire voter asks @JoeBiden why they should trust he can turn his campaign around, he asks if she’s ever been to a caucus before; when she says yes, Biden snaps: "No you haven’t. You’re a lying dog-faced pony soldier." pic.twitter.com/3uxOAu0Ues

In response to Biden’s remarks, which have since gone viral, Newt Gingrich questioned why such words were chosen to describe the young woman.

If he can’t handle a simple question from one of his own supporters, how can Joe Biden possibly take on Donald Trump one on one for six months?
🤔🤣🤡 #NewHampshirePrimary https://t.co/t0KVEc9uoZ

Are we still pretending that Joe Biden hasn’t lost his marbles?

Do yourselves and Google a video of him from 30 years ago and compare it to him now and tell me it’s the same person! Long gone. https://t.co/FLpocHkEJv

Tonight’s #Oscar for craziest quote by a Presidential Candidate:

Imagine that @realDonaldTrump rebuked a woman—when she said she had attended a political caucus—by saying she was a “lying dog faced pony soldier.” It would be MSM headlines. But @JoeBiden said it. So never mind. #maga2020.

That might have been a voice from his alternate mind, the one so exhausted by crooked dealings he can’t think straight, because it certainly can’t have been a way to court votes. #LyingDogFacedPonySoldier https://t.co/uZVhKHRuja