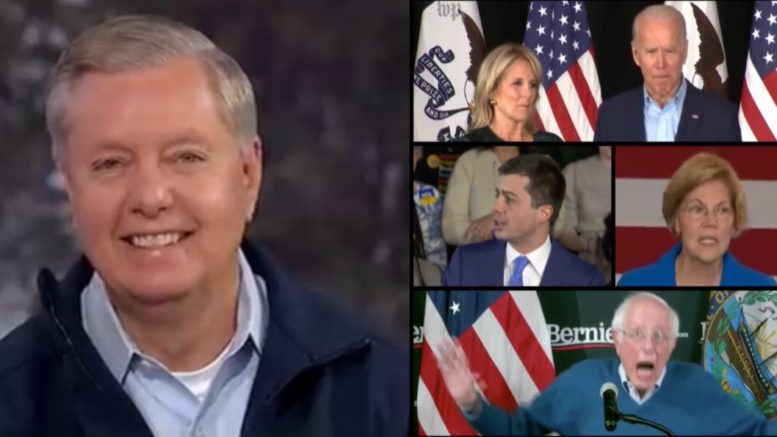 While campaigning for President Trump and Vice President Mike Pence in New Hampshire’s primary, Senator Graham mentioned the president’s rally that he had attended on Monday night, saying “These people are so committed to this president and his agenda.”

“The bottom line here is this president, Trump, has got a lot he can say that the other side can’t refute,” Senator Lindsey Graham said of the Democratic presidential candidates.

He noted though, that Democrats have been trying to attack the president since he was elected, adding, “You know why they’re trying to destroy his presidency? [Be]cause they can’t compete with it. They don’t have an agenda that’s going to make the economy better.”

Senator Graham also said of Democrats “every now and then they are amazingly honest”, referring to remarks made by Rep. Al Green (D-TX) in May 2019, who had publicly admitted on MSNBC that he was “concerned if we don’t impeach this president, he will get re-elected.”

Green also confessed in September 2019, during a rally, that Democrats could “risk losing their supporters at the ballot box in next year’s elections if they don’t move forward with the impeachment of President Trump.” (Continued Below)

“They’re trying to destroy him as a person, his family, drive him from office, because they can’t compete with the results of his presidency,” Senator Graham said. “That’s what this is all about.”

“The president’s in a spot where he really can’t lose as this plays out,” the South Carolina Senator said. “[Joe] Biden’s going to win South Carolina, you’re going to have three different winners in the first three states.”

Senator Graham predicts when the 2020 Democratic National Convention in July comes around, that “if you can’t find a nomination on the first round of voting, the Democratic Party as we know it is going to completely implode.”

He also believes if a nomination isn’t determined after the first round of voting, “It’s going to help President Trump get reelected.”

“You’re seeing the demise of the Democratic Party that your grandfather and grandmother knew, and we’ll see how that affects America,” Senator Graham stated. [Emphasis added].

When host Sandra Smith asked Sen. Graham why he doesn’t think Amy Klobuchar can fill Joe Biden’s spot he replied, “She doesn’t have the juice. This is socialism versus liberalism. Amy is a nice person, but at the end of the day, she’s not going to be able to compete with Bloomberg. He’s got just too much money.” (Video Below)

Senator Lindsey Graham tweeted on Tuesday, saying he’s “proud to be in NH today campaigning for Donald Trump and Mike Pence in the GOP primary”.

I’m proud to be in NH today campaigning for @realDonaldTrump and @Mike_Pence in the @GOP #FITN primary. I’ll be joining @Kilmeade on Fox News Radio now and will be on @AmericaNewsroom at 10 am. Tune in!

(Related: Joe Biden: Democrats “Could Run Mickey Mouse Against This President And Have A Shot”)