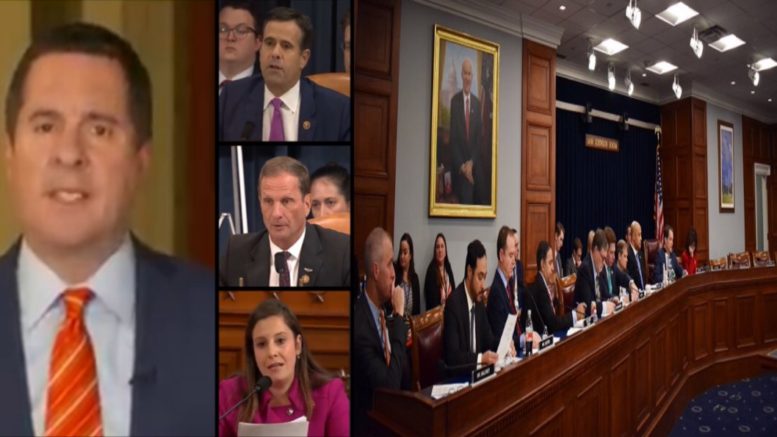 House Intelligence Chairman Adam Schiff (D-CA) took to Twitter Wednesday, in what appeared as if he was trying to embarrass Republicans on the committee because they boycotted a Wednesday hearing, which was scheduled on “the national security impacts of emerging technologies.”

Rep. Adam Schiff, however, failed to mention in his tweet the specific reason why the Republicans on the committee boycotted Schiff’s hearing that took place Wednesday.

Ranking member on the committee, Rep. Devin Nunes (R-CA), and Rep. Chris Stewart (R-UT) had written a letter saying that the Intelligence Committee needs to focus on Foreign Intelligence Surveillance Act (FISA) abuse that was documented in the Inspector General’s report released in December 2019.

“Under your chairmanship, the House Intelligence Committee has strayed far from its mandate of overseeing the Intelligence Community. In fact, we have gone months at a time in which we’ve hardly held any oversight-related briefings or hearings at all,” the Republican lawmakers wrote, in part.

The letter added that “numerous critical issues pertinent to this Committee’s jurisdiction were ignored” in recent days, adding that Justice Department Inspector General Michael Horowitz released his report on Dec. 9, 2019—during the height of the impeachment inquiry—that found “seventeen serious shortcomings related” to the FISA process to surveil former Trump campaign aide Carter Page, as reported by the Epoch Times. (Continued Below)

“The IG Report was followed by the release of a declassified assessment by the Department of Justice acknowledging that at least two of the four FISA applications lacked probable cause,” the Republicans on the committee noted. “Despite the seriousness of these issues and our clear jurisdiction, you have failed to hold a single briefing or hearing on this matter.”

After the release of the FISA report, Attorney General William Barr issued a scathing response saying, “The FBI launched an intrusive investigation of a U.S. presidential campaign on the thinnest of suspicion.” (Continued Below)

“The Inspector General’s report now makes clear that the FBI launched an intrusive investigation of a U.S. presidential campaign on the thinnest of suspicions that, in my view, were insufficient to justify the steps taken. It is also clear that, from its inception, the evidence produced by the investigation was consistently exculpatory. Nevertheless, the investigation and surveillance was pushed forward for the duration of the campaign and deep into President Trump’s administration,” the Attorney General stated in December.

“In the rush to obtain and maintain FISA surveillance of Trump campaign associates, FBI officials misled the FISA court, omitted critical exculpatory facts from their filings, and suppressed or ignored information negating the reliability of their principal source. The Inspector General found the explanations given for these actions unsatisfactory. While most of the misconduct identified by the Inspector General was committed in 2016 and 2017 by a small group of now-former FBI officials, the malfeasance and misfeasance detailed in the Inspector General’s report reflects a clear abuse of the FISA process,” AG Barr added, in part. (Continued Below)

(Related: President Trump Fires Back After The Release Of IG Horowitz’s Report: “This Was An Attempted Overthrow & They Got Caught”)