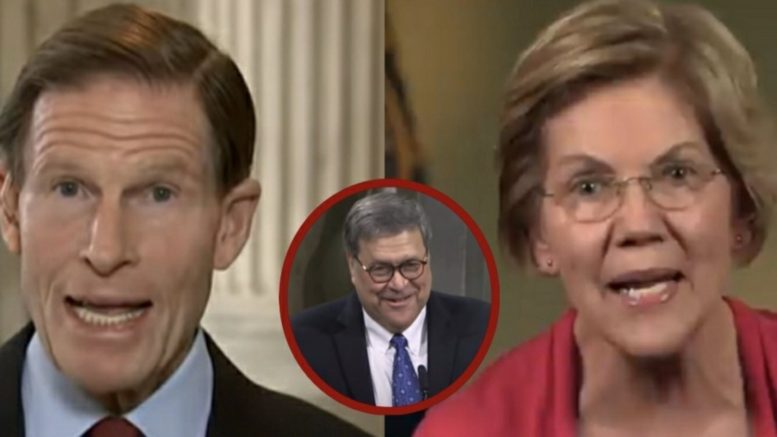 Senator Richard Blumenthal (D-CT) spoke with MSNBC’s Hallie Jackson Wednesday over the recent developments in the sentencing of former Trump aide Roger Stone. According to Fox News, senior DOJ officials were “shocked” that prosecutors handling Stone’s case were recommending between 87 and 108 months in prison.

Blumenthal however, is calling on the Attorney General to resign after Barr disagreed with the 7-9 year-long sentencing, and further calling on Senate Judiciary Chairman Lindsey Graham (R-SC) to open an investigation into the DOJ’s decision to reduce Stone’s sentencing.

“This brazen assault on the independence and integrity of the Department of Justice is unprecedented,” Senator Blumenthal told Hallie Jackson.

“I think that Attorney General Barr has no choice but to follow these dedicated prosecutors out the door,” he suggested after it was reported that four prosecutors who were handling Stone’s case, withdrew from their posts out of protest.

Senator Blumenthal claimed that Attorney General William Barr is “acting simply as a henchman and a political operative” of the President, adding, “[Trump’s] always wanted the Attorney General of the United States to be his Roy Cohn, his personal attorney.”

He claimed that the judge in the trial of Roger Stone is going to be “very, very angry” about “political interference” and “compromise of the integrity of the Department of Justice,”, suggesting that it “could backfire on Roger Stone”. (Continued Below)

Asked if he has heard back from Senator Lindsey Graham pertaining to his request to open an investigation into the DOJ, Senator Blumenthal replied, “I have not yet heard back. … We also have the option of the Office of Inspector General, who is an independent watchdog. And I am calling on the office of the Inspector General, Michael Horowitz to conduct an immediate, intensive investigation.”

“Because this kind of policial interference is exactly the abuse of power, the dictatorial interference that we all ought to resist, on both sides of the aisle,” he said.

When asked if he thinks 7-9 years for Roger Stone to be sentenced is too harsh, the Connecticut Senator said, “It’s for the judge to consider. The prosecution makes a recommendation on the basis of facts that it has proven in court. … They found him guilty. This kind of interference in an insult, not only to the judge but to the jurors who reached that verdict. … But frankly, I think that kind of sentencing is well within the guidelines and judicial oversight.” (Video Below)

“Congress must act immediately to rein in our lawless Attorney General. Barr should resign or face impeachment. And Congress should use spending power to defund the AG’s authority to interfere with anything that affects Trump, his friends, or his elections,” she claimed. (See Below)

Donald Trump is shredding the rule of law in this country. His AG overruled career prosecutors to reduce the sentence for his buddy Roger Stone after Stone committed crimes to protect him. Every Republican who voted to acquit Trump for his corrupt actions enabled and owns this.

Congress must act immediately to rein in our lawless Attorney General. Barr should resign or face impeachment. And Congress should use spending power to defund the AG’s authority to interfere with anything that affects Trump, his friends, or his elections.

Abusing official power to protect political friends and attack opponents is common in authoritarian regimes like Putin’s Russia. Trump and Barr’s conduct has no place in our democracy. To end it, Congress must act—and the American people must hold them accountable in November.

Americans of all political stripes should be gravely concerned about the corruption that pressures federal prosecutors to give sweetheart deals to criminals who do their crimes on behalf of Donald Trump.