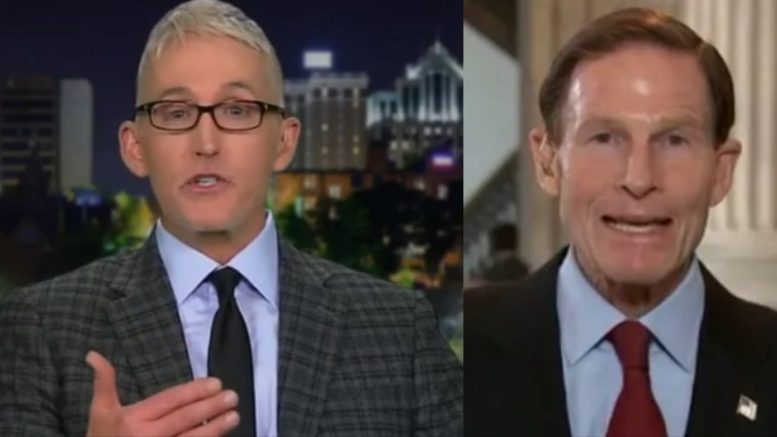 On Wednesday evening, Trey Gowdy slammed Democrats who are calling on Attorney General William Barr to resign in wake of the DOJ amending a sentencing recommendation for Roger Stone.

According to reports, top brass at the DOJ were “shocked” that prosecutors handling Stone’s case were recommending between 87 and 108 months in prison. As a result, the DOJ submitted an amended filing on Tuesday, where they told the judge that the government “respectfully submits that a sentence of incarceration far less than 87 to 108 months’ imprisonment would be reasonable under the circumstances,” but that the government “ultimately defers to the Court as to the specific sentence to be imposed.”

Four prosecutors who handled Stone’s reportedly withdrew from their post out of protest and at least two U.S. Senators, including Richard Blumenthal and Elizabeth Warren, are now demanding Barr’s resignation amid the DOJ’s decision.

In response to Democrat senators calling for Barr’s resignation, Trey Gowdy told Martha MacCallum that such a notion is about the “dumbest damn thing” he has ever heard, since the judge will ultimately be the one who makes the final call on what the appropriate sentence is for Stone.

Gowdy also mentioned that there are people in America who have committed worse crimes, but have gotten much less sentences then what prosecutors initially recommended for Stone. Video Below

“The notion that Bill Barr should resign is about the dumbest damn thing I have ever heard.”

“So, let the judge decide. I think two or three years is about right,” Gowdy declared. Video Below