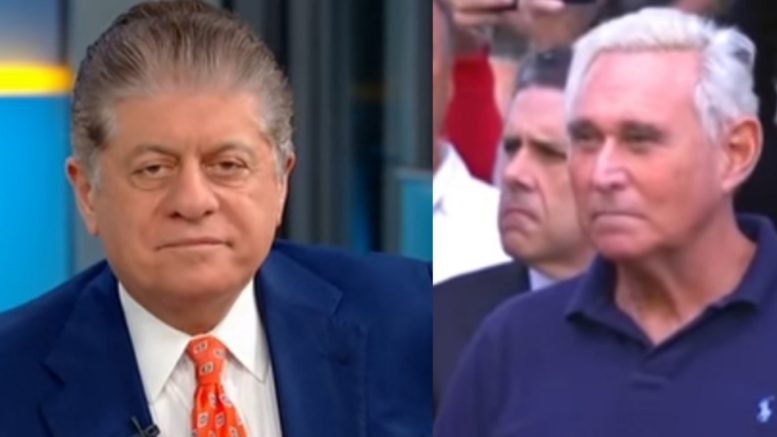 On Thursday, Judge Napolitano broke down why Roger Stone is ‘absolutely entitled to a new trial’ amid reports that one of the jurors appears to have strong bias against President Trump and Stone as shown in social media posts.

According to Fox News, a female by the name of Tomeka Hart revealed on Wedneday that she was the foreperson of the jury that convicted Stone, who was a close advisor to President Trump during the 2016 election. As news of her revelation circulated, web sleuths uncovered Hart’s bias towards both Stone and President Trump.

“Hart even posted specifically about the Stone case before she was selected to sit on the jury, as she retweeted an argument mocking those who considered Stone’s dramatic arrest in a predawn raid by a federal tactical team to be excessive force. She also suggested President Trump and his supporters are racist and praised the investigation conducted by Special Counsel Robert Mueller, which ultimately led to Stone’s prosecution.”

While weighing in on the latest reveleation surrounding Stone’s case, Judge Napolitano said in an interview,  “He’s absolutely entitled to a new trial with a member of the jury making these kinds of revelations about the politics involved in the decision to prosecute him.”

Related Article: Trey Gowdy Slams Democrats For Calling On AG Barr To Resign: “About The Dumbest Damn Thing I Have Ever Heard”

Napolitano continued, “Look, I’ve presided over 150 jury trials — most were criminal. It’s the duty of the judge to ensure that both the government and the defendant get a fair trial. And if the judge discovers afterwards that there was a built-in inherent bias on the part of a member of the jury against the defendent, that is an automatic trigger for a new trial.”

“She is going to have to call those jurors back in and interrogate them or make a decision on the spot,” he declared. Video Below