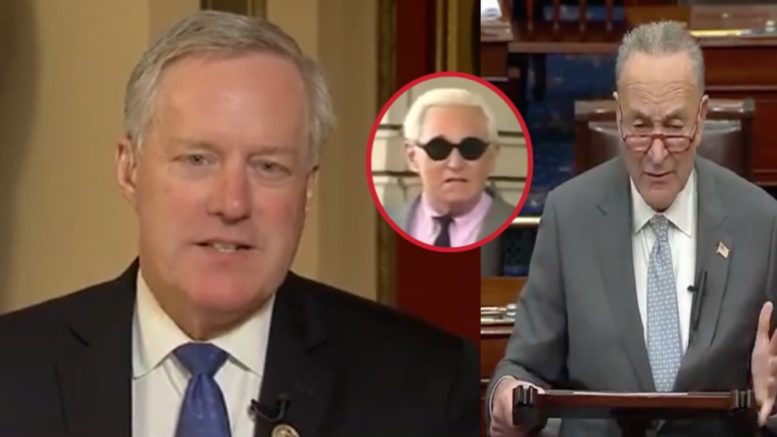 Fox News reported Tuesday that top brass at the DOJ were “shocked” that prosecutors handling the case had recommended Monday night that Judge Amy Berman Jackson sentence 67-year-old Stone to between 87 and 108 months in prison.

“It is really Chuck ‘swampy’ Schumer who needs to be called out on this,” Rep. Mark Meadows expressed.

“They might as well go ahead and call for every single resignation of every single Trump administration official because they’ll get to him eventually. It’s one crisis after another,” Rep. Meadows continued. “The only thing that they can’t argue with, are the president’s accomplishments.

“The president was right to weigh in, but Chuck Schumer is just, once again, playing politics with a few soundbites and a Twitter feed,” he added.

Senator Schumer, on Tuesday, called for an Inspector General investigation into the DOJ’s decision to reduce the recommended prison sentence for Stone. (Continued Below)

Rep. Meadows fired back saying, “Should it surprise us that Elizabeth Warren, whose campaign is going down the toilet, is trying to make one last-ditch effort to try to get some headlines? Listen, this is all about politics from Jerry Nadler to Elizabeth Warren and in between. But more importantly than that, when we start to look at what they’re really calling for, let’s look at what actually happened.”

“We had FISA abuse. They’re not willing to hold a hearing on that. … There’s nothing happening here on Capitol Hill. They’re sending letters and sending out tweets that suggest that Bill Barr, who is an honorable man, who is doing a great job, who ultimately will restore the credibility of DOJ– you know, they’re attacking him. And I’m gonna stand by him and the president, not because of any political theory, but because it is the right thing to do,” he added. (Video Below)

Meanwhile, Attorney General William Barr has reportedly agreed to testify before the House Judiciary Committee next month amid Democratic criticism over Barr “taking charge” of the Roger Stone case.

Democrats on the panel released a letter Wednesday reporting AG Barr’s March 31 appearance before the committee, saying they are concerned the agency has become politicized under his watch.

To the DOJ Inspector General:

I’m calling for an immediate investigation of why the Roger Stone sentencing recommendations by career prosecutors were countermanded.

The American people must have confidence that justice in this country is dispensed impartially. pic.twitter.com/vaBtC1FlUI