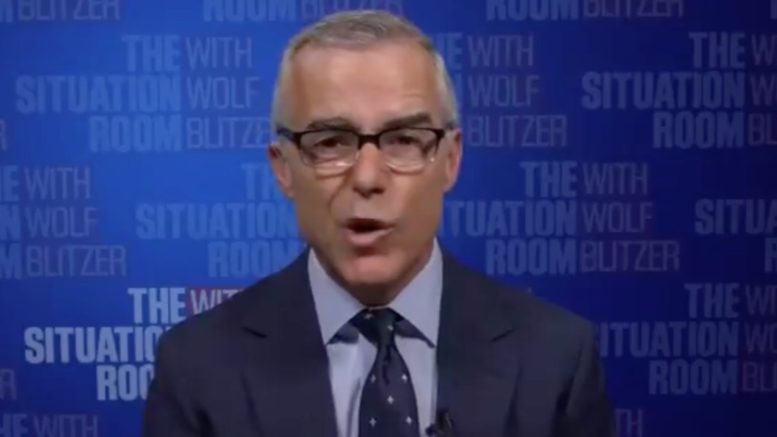 Former FBI Deputy Director Andrew McCabe said Friday on CNN’s “The Situation Room”, that he doesn’t think he will “ever be free” of President Trump and “his maniacal rage”, following the Justice Department decision to no longer pursue criminal charges against him.

The Justice Department said Friday it will not pursue criminal charges against former FBI deputy director Andrew McCabe, after a nearly two-year-long investigation into accusations brought by the agency’s independent watchdog who found that he lacked “candor” when questioned about leaking to the media, reported Fox News.

“We write to inform you that, after careful consideration, the government has decided not to pursue criminal charges against your client, Andrew G. McCabe,” Cooney wrote. “Based on the totality of the circumstances and all of the information known to the government at this time, we consider the matter closed.”

“I don’t think I’ll ever be free of this President and his maniacal rage that he’s directed towards me and my wife since October of 2016 for absolutely no reason whatsoever,” Andrew McCabe claimed after the DOJ’s decision.

“The president has been lying about us and defaming me and my family consistently for years now. So do I think that will stop now because of the DOJ’s decision today? No. I have no illusion that will ever stop,” the CNN contributor added. (Continued Below)

In March 2017, then-Attorney General Jeff Sessions fired Andrew McCabe after Inspector General Michael Horowitz found that the former FBI Deputy Director had not been forthcoming, in regard to the handling of the FBI’s probe into Hillary Clinton’s use of a private email server, while she was secretary of state in the Obama administration.

“After an extensive and fair investigation and according to DOJ procedure, the Department’s Office of the Inspector General (OIG) provided its report on allegations of misconduct by Andrew McCabe to the FBI’s Office of Professional Responsibility (OPR),” Sessions had said in a statement.

The FBI’s OPR then reviewed the report and underlying documents and issued a disciplinary proposal recommending the dismissal of Mr. McCabe. Both the OIG and FBI OPR reports concluded that McCabe had made an unauthorized disclosure to the news media and lacked candor − including under oath − on multiple occasions, as reported by Us4Trump. (Video Below)

“I fully expect that he’ll continue to hound me and my family,” he said.

Andrew McCabe: "[Trump's] a vindictive guy and I fully expect that he'll continue to hound me and my family." pic.twitter.com/i97zIAeCXk

Following the DOJ’s decision not to pursue criminal charges against Andrew McCabe, former FBI lawyer, Lisa Page, took to Twitter to congratulate him, writing, “Cheers, Andy”, holding up a drink.

Page, who is known for her infamous relationship with married FBI agent Peter Strzok, wore a shirt in the photo with: “i am done being quiet” written on it.

(Related: Gregg Jarrett & Tom Fitton On McCabe Being Prosecuted: ‘If [He] Isn’t Prosecuted, I’d Pardon Flynn In A Heartbeat’)