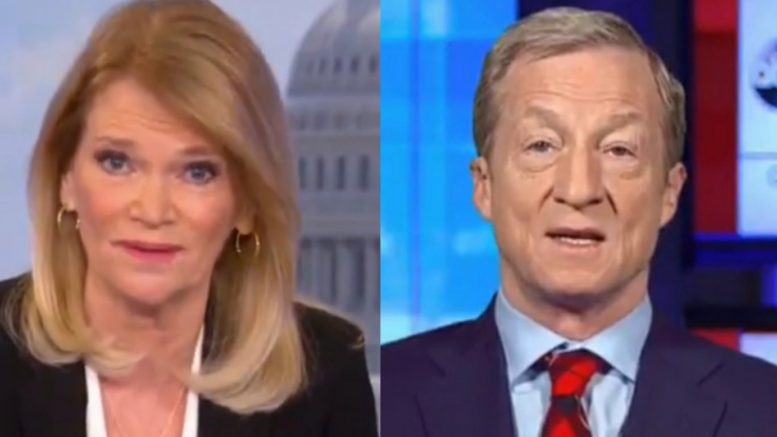 Raddatz cited a new Quinnipiac national poll, which indicated that 70% of American voters believe Trump’s economy is excellent or good.

Raddatz stated: “Mr. Steyer, you say that you can take on Donald Trump on the economy, but the latest Quinnipiac national poll again released just this week says 70% of voters describe the nation’s economy as excellent or good, so how do you convince them change is needed when they think they’re doing so well under Donald Trump?”

In his response, Steyer suggested everything that President Trump says “superficially sounds right, but is actually a lie.”

“So, when he says the economy is growing, I can show that, in fact, all the money is going to rich people,” Steyer said. “When he says unemployment is down, which is true, I can show the wages that people are getting don’t support a family, and when he says the stock market is up…it’s largely because of the huge tax break he gave to big corporations.”

As Steyer mentioned that 85% of stocks are owned by the wealthiest Americans, Raddatz cut in and reminded the presidential candidate that the 70% of Americans who rated the economy as good or excellent are “not wealthy people.” Video Below

“You talk about the wealthy. They are all not wealthy people,” Raddatz told Steyer. “70% say the economy is good and they’re doing well.”

With that said, Steyer accused Raddatz of “standing up for Mr. Trump’s version of the economy.”

Related Article: Chris Wallace Suggests “Trump Is Better Off Now Than He Was When This Impeachment Process Began”