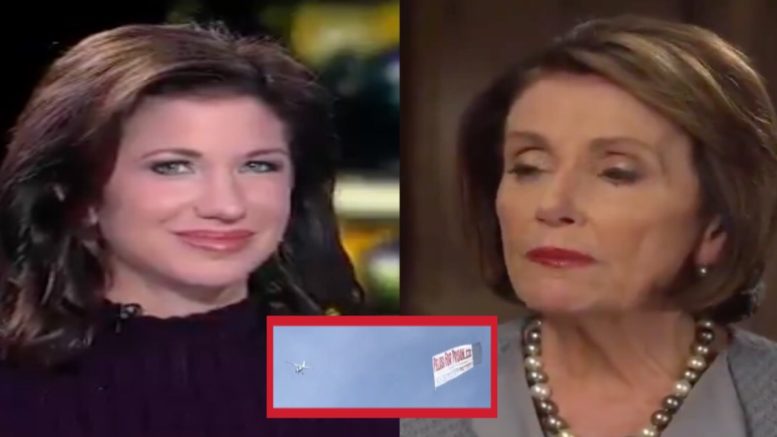 Congressional Republican candidate DeAnna Lorraine is running against Rep. Nancy Pelosi (D-CA) in California’s 12th District, and she’s putting up a fight to show that she’s serious about defeating the liberal House Speaker.

On Sunday, Lorraine took to Twitter to announce: “We’re giving a gift to [President Trump] in honor of President’s day – the #PelosiForPrison PLANE will be out again today canvassing the SF skies!”

DeAnna Lorraine listed different areas on Twitter where the plane would be flying around in San Franciso on Sunday, saying, “You can get a great view of the banner,” which reads: “Pelosi For Prison”.

“In honor of President’s Day, I’m flying the #PelosiForPrison plane around San Francisco just to remind @SpeakerPelosi that @realDonaldTrump is still her President!” Lorraine declared on Twitter Sunday morning.

“Keep your eyes to the sky, San Francisco & if you see the plane in the air snap a picture and post it. #Deanna2020”, she added.

In another post on Twitter, DeAnna Lorraine wrote, “Headed to @SpeakerPelosi’s office!✈️#PelosiForPrison”, and included a video of the plane and the banner flying high through San Franciso. (Video Below)

Off to Marina green Park and surrounding areas ✈️ pic.twitter.com/30jdadZWav

We leave you with a post From DeAnna Lorraine on why she is running for Congress, her thoughts on Speaker Pelosi, and Democrats:

Tick-tock Old Nan, your day of reckoning is coming for your crimes against Americans⏰🔥#ByeNancy pic.twitter.com/Sz7e5sDQqn

You can learn more about DeAnna Lorraine HERE, or at PelosiForPrison.co.

(Related: Pelosi Puts Her Irritation On Full Display Over The SOTU & Trump’s Acquittal: “He’s Impeached Forever, Branded With That & Not Vindicated”)