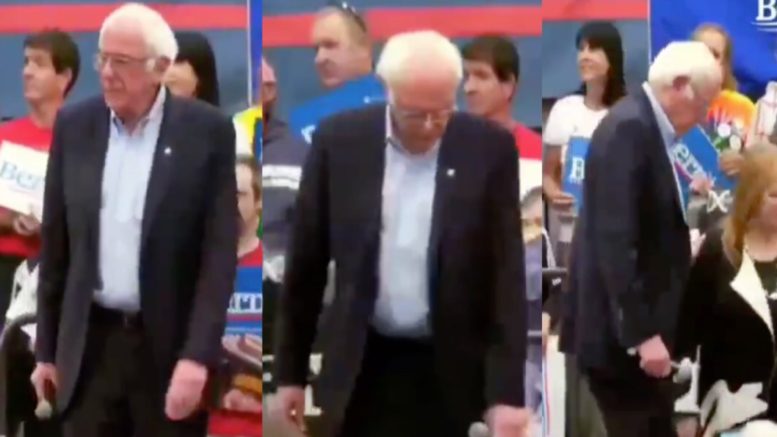 Sanders, during the rally, was introducing his wife when a woman, who was clothed, first grabbed his microphone to protest the dairy industry and animal agriculture.

Moments later, three topless female protesters rushed the stage and poured liquid on themselves in what appeared as milk cartons with fake blood. One of them held a sign that read: “Let Dairy Die”, along with it also being written on the protester’s chests.

Bernie Sanders walked off of the stage with his wife as security took care of the situation.

The first protester, who initially grabbed the microphone, was identified as Priya Sawhney of the animal rights network Direct Action Everywhere, The Hill reported. (Continued Below)

The women who were topless were arrested for indecent exposure and are held on $2,500 bond each, according to Direct Action Everywhere. Sawhney was not arrested, the group said.

“If Bernie truly cares about justice, he will stop propping up the dairy industry, which relies on the abuse of female cows,” Sawhney said in a statement shared by Direct Action Everywhere. I love Bernie, but we must hold abusive industries accountable, not shield and subsidize them. Animal farming is an industry which gives welfare payments to millionaires. People are fed up. Like the Sanders campaign itself, animal rights is a burgeoning mass movement.”

Bernie Sanders returned to the stage after things calmed down and said, “This is Nevada. There’s always a little bit of excitement at no extra cost.” (See Below)

Video and other images of the topless protesters were posted online.

We leave you with Sanders and his supporters getting photo-bombed. We cannot verify when and where this rally occurred.

Photo-bombing commies for the win😂 pic.twitter.com/l72dOBumoJ