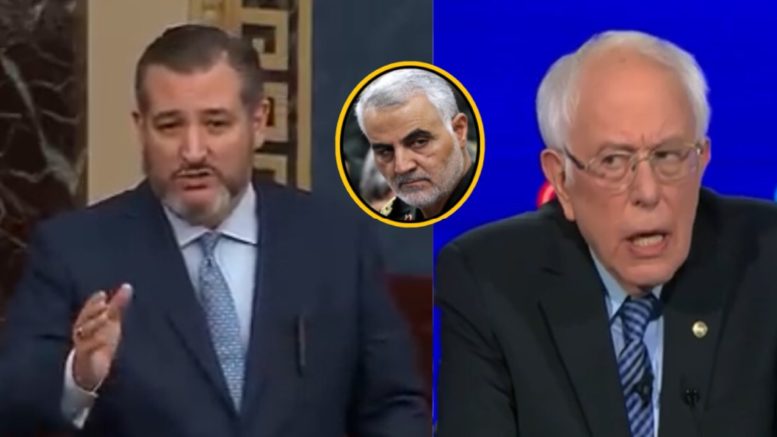 Senator Ted Cruz (R-TX) took to Twitter Monday to share an article about Senator Bernie Sanders (I-VT), who was a “no show” to a vote on an amendment last week in the Senate, which commended the U.S. armed forces and intelligence community for the airstrike that killed top Iranian General Qassem Soleimani at Baghdad International Airport.

The amendment was attached to a resolution curbing President Trump’s war powers regarding Iran. The resolution passed 55 to 45, which left it short of a veto-proof majority, as per Free Beacon.

The Texas Senator highlighted the results, including two paragraphs from the article in his post on Twitter: “All 53 Republicans, 10 Dems & Independent Angus King supported the amendment introduced by Sen. Ted Cruz. It expressly praised [President Donald Trump], who ordered the strike that took out the terrorist leader of the Islamic Revolutionary Guard Corps.”

“Sanders was one of only two senators to skip the vote, with Ed Markey (D., Mass.) also absent. Sanders’s fellow 2020 presidential candidates in the Senate, Amy Klobuchar (D., Minn.) and Elizabeth Warren (D., Mass.), attended and voted ‘nay’ on the amendment, which passed 64 to 34,” Senator Ted Cruz tweeted.

Sanders was critical of the killing of Soleimani, calling it an “assassination” and likening it to Russia’s killing of dissidents under Vladimir Putin. He also called it an escalation that could lead the United States into war with Iran, Free Beacon reported. (Continued Below)

Sanders was one of only two senators to skip the vote, with Ed Markey (D., Mass.) also absent. Sanders's fellow 2020 presidential candidates in the Senate, Amy Klobuchar (D., Minn.) and Elizabeth Warren (D., Mass.), attended and voted "nay" on the amendment, which passed 64 to 34

.@BernieSanders will never have what it takes to be Commander and Chief…

So-called left in US applies to Machiavellian principles to the teeth. It is laser-focused to gain power at any cost.

“Left” has become a baggage of contradictions: what it claims and what it does.

It claims to be for people, but it unites with mullahs, #1 sponsor of terrorism.

Congratulations. It’s necessary to know who defends this country.. Thank you @tedcruz

Thank you .@SenTedCruz . You are absolutely right . Soleimani was a vicious criminal. He was responsible for killing over 1500 #Protesters in #Iran on November.He helped Assad kill hundreds of thousands in Syria. He was also responsible for American soldiers get killed in Iraq.

Related: Reporter Asks Cruz, “Shouldn’t Half Of Your Children Be In Prison?”, Cruz Fires Back: “Sorry That You Want To Throw A 9 Year Old In Prison”