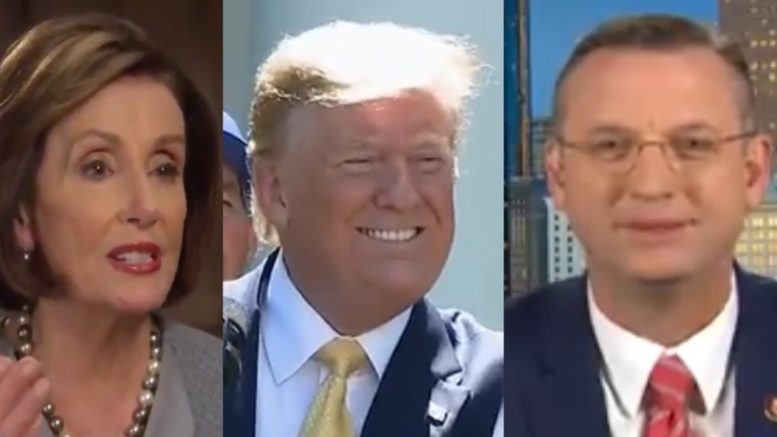 Asked what he thinks about Nancy Pelosi (D-CA) pursuing an endless impeachment against the president, Congressman Collins recommended that the House Speaker “needs to take a vacation”.

“She needs to go clear her head. She needs to get over the disaster that she put the country through last year,” Rep. Doug Collins

“The president was acquitted forever. The president was put on trial in the Senate– maybe she slept through it, I’m not sure. There was a trial, and the Senators said, ‘He did nothing wrong’, they acquitted him and put this thing forward,” the Georgia Congressman explained.

“We need to put this nightmare to bed,” he recommended. “She needs to quit going on TV and saying ‘He’s impeached and tarnished forever’. Because it’s not true. The only that is true is she’s making everything political about this president and the 2020 election. This president is gonna get re-elected, and a lot of it has to do with incessant drumbeat from the Speaker over things that went on in the House that were unfair to the president, unfair to the country, and unfair to the American people.”

On Saturday, Speaker Pelosi spoke with CNN’s Christiane Amanpour in an interview, venting her frustration over the President’s acquittal in the Senate impeachment trial. (Continued Below)

Congressman Doug Collins believes the House needs to “focus on what matters to the American people,” instead of Pelosi’s “personal political agenda”.

“At this point, the House should have never been turned into the DNC’s political arm. And it’s really all they’re doing right now. The President has an agenda. The 2020 candidates on the Democratic side have talking points. We need to make sure with this impeachment exercise in the House– I would like to see them actually run on an agenda, instead of actually running against the president all the time,” Congressman Collins added.

(Related: Trey Gowdy Slams Democrats For Calling On AG Barr To Resign: “About The Dumbest Damn Thing I Have Ever Heard”)