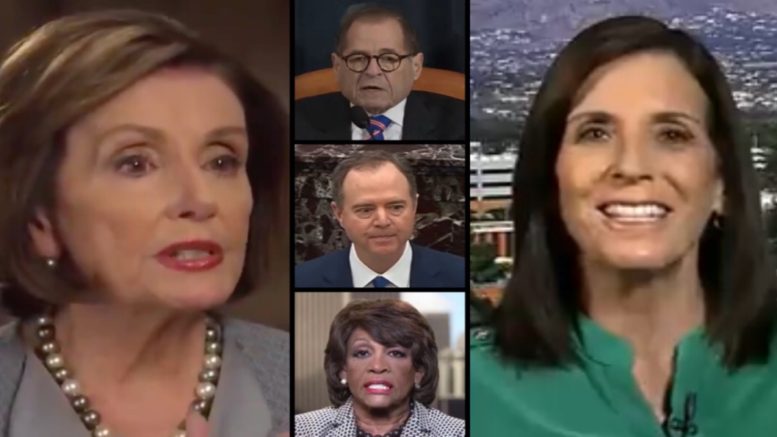 Senator Martha McSally (R-AZ) spoke with “Fox & Friends” on Monday, calling on Democrats to stop new investigations and get back to work.

This comes amid some Democrats calling for new investigations following the Department of Justice’s decision to reduce Roger Stone’s prison sentence recommendation.

“If you recall, [Democrats] have been trying to investigate this president on every from his tweets– they tried to impeach him 8 times before the last impeachment trial that we went through– this hyperpartisan environment that we’re in,” Senator McSally said.

“I’ll tell you, in Arizona, people are tired of their obstruction and their investigations and their impeachments. They want them to get to work– to address the issues that impact Americans,” the Arizona Senator explained.

She went on to say: “We need to lower the cost of prescription drugs. President Trump called on us at the State of the Union address to put legislation on his desk. There’s a bipartisan bill, I co-sponsored it recently, Chuck Grassley’s leading it. I’ve got some other initiatives, I’ll be rolling out on this topic. This is what matters to people in Arizona, plus supporting our veterans and preventing suicide– so many other issues, let’s get to work.”

Meanwhile, Senator Elizabeth Warren (D-MA) took to Twitter in a 6 part series of tweets, calling on Attorney General William Barr to “resign or face impeachment”. Senator McSally said that Warren is facing a failed candidacy, and believes that “nobody is listening” to her. Continued Below

(Related: Sen. McSally: “I Decided To Call A Liberal, A Liberal, & For Whatever Reason, They Couldn’t Handle It”)

“Bill Barr is a good man. I appreciate him stepping up to serve again. And he gave the president some advice. … When you hire good people, maybe you should listen to that advice. But I think now, that we need to get back to work. [Elizabeth Warren] needs to get back to the Senate– stop missing votes, and start working on the things that matter to Americans,” McSally urged.

Asked if the president should have weighed in on the Roger Stone case, the Arizona Senator said, “The president has a right, just like everyone else.” Video Below

President Trump will be holding a rally in Phoenix, AZ Wednesday, February 19th. Senator McSally expressed that Arizona is “excited to have President Trump back”. (Tickets HERE)

“He came out to rally for me in 2018. I was the first Senator he endorsed in 2020. There’s a lot at stake. Arizona will be ground zero. We will make sure that President Trump wins Arizona and then, I win Arizona. We are ground zero to keep the Senate majority,” Senator McSally said.

“And my opponent, this week, confirmed that he would support Bernie Sanders and the Democrat socialist agenda if he’s the nominee. We need to make sure we don’t’ let that happen, and I’m looking forward to hosting President Trump back here again,” the Arizona Senator added.

“They tried to Impeach the President eight times before this last Impeachment trial that we went through. In Arizona, people are tired of their obstruction, their investigations, and their Impeachments. They want them to get to work.” @SenMcSallyAZ @foxandfriends Thanks Martha

(Related: Wolf Blitzer Says Sen. McSally Should Apologize For Calling Raju A ‘Political Hack’, McSally Fires Back: ‘I Call It Like It Is’)