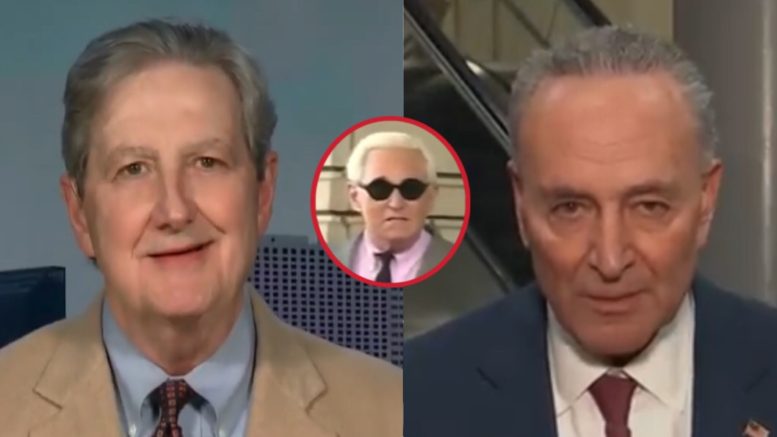 Senator Kennedy told Neil Cavuto, “It’s clear the presidents been busy today”, adding that he didn’t want the Fox News host to faint as he didn’t “have an opinion on the individual cases” because he didn’t have a chance to look it over yet. “All I feel comfortable saying is the President has the power, and he has decided to exercise it,” he said.

The Louisiana Senator did note, however: “Neil, if [President Trump] pardons Michael Avenatti, let me know, okay?”, to which Cavuto laughed and told Senator Kennedy, “That would be a Fox News alert, Senator.”

Meanwhile, the judge overseeing the case of Roger Stone said his sentencing hearing will move forward as planned on Thursday, amid intense scrutiny of the Justice Department’s handling of the case.

In a 12-minute conference call with the defense and prosecution teams on Tuesday, U.S. District Judge Amy Berman Jackson said she will still hand down Stone’s sentence at Thursday’s hearing, but indicated she plans to defer the execution of the sentence until the court addresses Stone’s request for a new trial. “I’m willing to make sure that there are no consequences that flow from the announcement of what the sentencing will be,” Jackson said on the call, which was broadcast in the courtroom, as per CBS News. (Continued Below)

There has been significant fallout since the department softened the sentencing recommendation. The Federal Judges Association reportedly called an emergency meeting to discuss the matter on Tuesday. And since Sunday, more than 2,000 former Justice Department employees have signed an open letter calling for Barr’s resignation and expressing support of the four prosecutors, CBS News reported.

Senator Kennedy said that he “understands that Mr. Stone’s lawyers have raised an issue about the impartiality of at least one juror”, adding, “And my response to that is, that’s why God made appellate judges. You raise those issues on appeal.”

“We have had a little dust-up in terms of the sentencing,” he continued. “Let me clear; I trust [AG] Bill Barr. Now I know there are like 1100, I read, former Justice Department officials wanting to resign. If you look deeply, you’ll find out that’s been put together by a group called Project Democracy, which is a group that’s just to the left of Lennon. I think everybody ought to leave Bill Barr alone and let him do his job. He’s serious, he’s mature, he’s smart.” (Continued Below)

Senator Kennedy believes that President Trump is not going to stop tweeting and pointed out that a lot of the controversy has been “orchestrated on the Senate side”.

“I can tell you who has orchestrated most of it: Senator Schumer. Now, Chuck is one of my colleagues, I respect him. But it’s driven by partisan rage. Chuck’s like a teenager right now; he hates everybody. He’s still upset over impeachment. And so, you have to consider the source of a lot of this pushback,” the Louisiana Senator explained.

Last week, Senator Chuck Schumer (D-NY) called on the DOJ’s Inspector General to start an “immediate investigation” amid the Department of Justice’s decision to reduce Roger Stone’s prison sentence recommendation. “I urge you to conduct an expedited review of this urgent matter and issue a public report with your findings and recommendations as soon as possible,” Schumer wrote to IG Michael Horowitz. (Video Below)

To the DOJ Inspector General:

I’m calling for an immediate investigation of why the Roger Stone sentencing recommendations by career prosecutors were countermanded.

The American people must have confidence that justice in this country is dispensed impartially. pic.twitter.com/vaBtC1FlUI