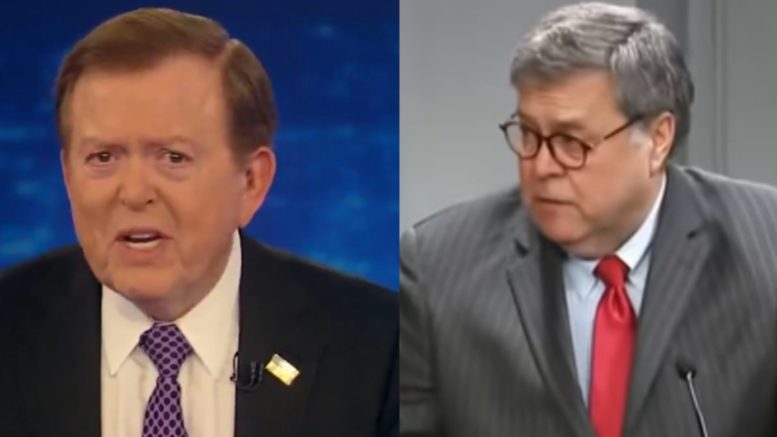 Dobbs specifically targeted Barr for “whining” about President Trump tweeting about criminal cases, which he said can “make it impossible” to do his job.

Related Article: Sara Carter On Her Level Of Confidence In Barr: “If He Does The Right Job, People Will Be Indicted & The Truth Will Be Exposed”

In response to Barr suggesting that his biggest challenge in Washington is President Trump, Dobbs slammed the AG for not mentioning “the venal shape shifters of Congress, or most prominently the poisonous chimera Speaker Pelosi nor her nasty apprentice called Schiff.”

“Nor is it the helminths who reside throughout our permanent bureaucracy, the deep state within,” Dobbs added. “Not the treacherous radical dems, the rino’s who are as subversive of our President as they are supportive, not the left wing national media who are servile accomplices of any swamp creature of either party, of any ideology or interest, so long as they seek to undercut or cut asunder President Trump.”

“Get a grip, Barr,” Dobbs demanded as he accused the Attorney General of being “wrong on several counts, including taking on his boss in public.” Video Below

He then called on Barr to “deliver on his mission” of cleaning up the DOJ and FBI which he said are “both crooked at the top.”

“Get back to work,” Dobbs said. “Too many of us have put our faith in you and John Durham for you to flag or fold.”

Finally, Dobbs urged Barr to “go after the damn bad guys and stand up for the President who is the only one who deserves your loyalty.” Video Below