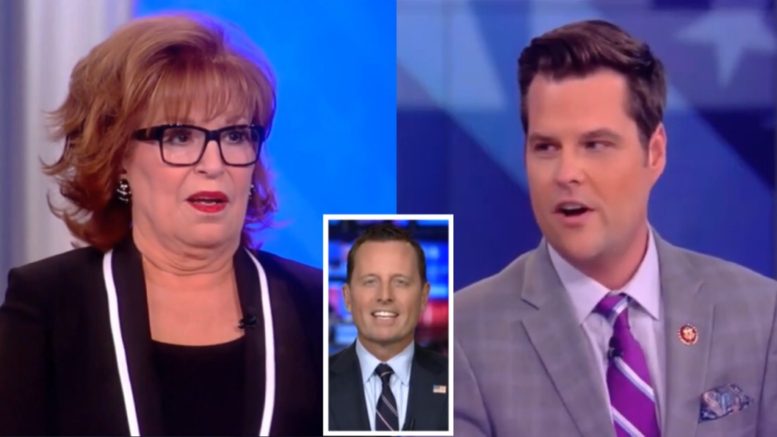 Congressman Matt Gaetz (R-FL) spoke with the liberal hosts of ABC’s “The View” on Thursday, defending President Trump and his policies.

Gaetz began by teasing co-host Joy Behar about the “black attire” that she wore the day after the Democratic debate, which was in Las Vegas, Nevada Wednesday night. “I was just wondering if you were wearing black as a consequence of like the death of the political left in the debate last night?” he asked Behar. “It was quite something to observe.”

While briefly discussing the Democratic candidates, Rep. Matt Gaetz confidently said “none of them are going to beat the president,” adding that we have a “raging economy right now, the American families see revenue pour in as a consequence of higher wages, more productivity, more business investment, more capital coming from overseas into our nation.”

Co-host Sunny Hostin pointed out that President Donald Trump was a Democrat first, to which the Florida congressman agreed then replied, “We’ve all been square dancing for a while and I think that we’re in a time of real political realignment in our country.”

“Let’s talk about your boss for a second,” Joy Behar said, to which Rep. Gaetz immediately fired back: “My boss [is] the people of northwest Florida. Don’t dismiss them. It’s the highest concentration of active-duty military in the country. And I know Meghan’s dad served there. So you can attack me, but don’t attack my constituents.”

Behar then brought up that President Trump named Richard Grenell as Acting Director of national intelligence, suggesting that he isn’t qualified. Rep. Gaetz listed his qualifications, but Behar interjected to say, “Germany, by the way, I was reading about him, they think he’s very thin-skinned, but that’s another story.” (Continued Below)

The Florida congressman shut down Behar by asking, “Well, this is The View, aren’t we all?”, which prompted silence from Behar, and the audience to gasp and moan. [Emphasis added].

Sunny Hostin immediately changed the subject to Roger Stone and whether the president will pardon him. “Do you think Trump should Pardon Roger Stone?”

“I do. And I think that it requires the view of the pardon power. Barrack Obama pardoned over 1700 people. Bill Clinton pardoned 459. Bill Clinton pardoned 16 people who were of a Puerto Rican terrorist organization that planned murders at the Fraunces Tavern here in the United States of America,” Rep. Gaetz explained, which triggered all of the hosts on The View, including conservative Meghan McCain. (Continued Below)

Hostin followed up by asking, “Can we agree that the pardon power needs to be reviewed and curbed?”

Gaetz responded: “So, great question. In Federalist 74, Alexander Hamilton writes that the reason we have the pardon power is to serve as a check on a criminal justice system, which if allowed to run wild could create a great sentence of sanguinity in our country. So I think if you look at the original intent of the pardon power, it cannot be limited. And again, Trump has pardoned 26 people. Obama pardoned over 1700. Bill Clinton pardoned 459.”

“I would agree that Roger Stone should be pardoned, and if for no other reason, there has been a double standard in this country where people like Peter Stzok, Lisa Page, Andrew McCabe, Clapper, Brennan have not faced consequences,” he added. (Video Below)