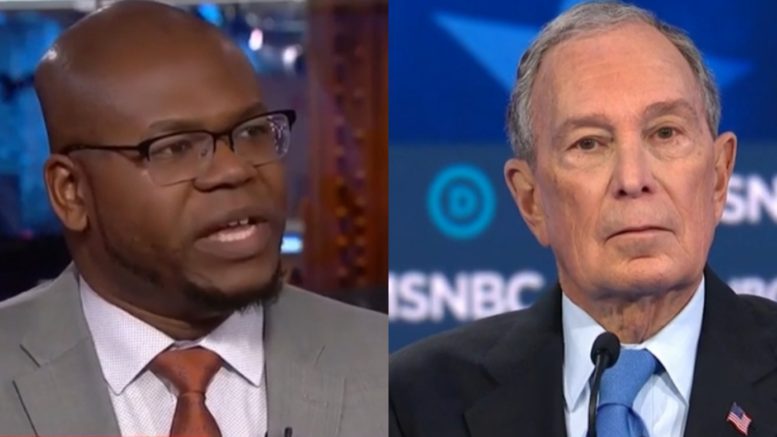 Like many of his colleagues in the news business, MSNBC political analyst Jason Johnson was not impressed with Mike Bloomberg’s performance in his first debate of the 2020 election cycle.

Bloomberg was, by far, the most anticipated candidate for Democrats heading into Wednesday’s debate, as he has surged in the polls after spening millions of dollars of his own money to make a splash in the race. However, Bloomberg fell way short on the Las Vegas debate stage, according to Johnson, and potentially “lost everything” he has been building over the past three months since announcing his candidacy.

Related Article: Michael Moore: The DNC Will Allow Bloomberg To Debate Because ‘He Has A Billion F***ing Dollars’

“The big new name tonight was gonna be Mike Bloomberg, and this probably was the most expensive night in Vegas I have ever seen,” Johnson declared. “He lost everything.”

He added, “This guy has spent $320 million dollars. He had the opportunity to really stand on stage and appear to be an equal with everybody else. He looked bored. He looked disenchanted

“He absolutely stumbled over very obvious questions that anybody could have anticipated about sexual harrassment and NDA’s and stop-and-frisk,” Johnson proclaimed. “I think it was a very bad night for him. He’s probably doubling the salaries of his staff who want to go into the spin room because I wouldn’t want to go in there and defend him after the night that he had.” Video Below

Here are some more of the various negative reactions to Bloomberg’s performance at Wednesday’s debate in Las Vegas:

CNN’s Gloria Borger: “Bloomberg was awful” & the DNC allowed him to pay for his podiumhttps://t.co/Db12jxVqkX pic.twitter.com/MBgOd0qTkT

Andrew Yang: Mike Bloomberg was “lethargic and uninterested” at the Democrat debatehttps://t.co/EFvbDitjqx pic.twitter.com/R4mEEp8G37

In ending, here is what Charlie Daniels thinks about Mike Bloomberg:

Hey Bloomberg you know as much about farming as a hog knows about an airplane, so how are you going to teach somebody else how to do it,
Better stay in NYC where corn comes in cans.