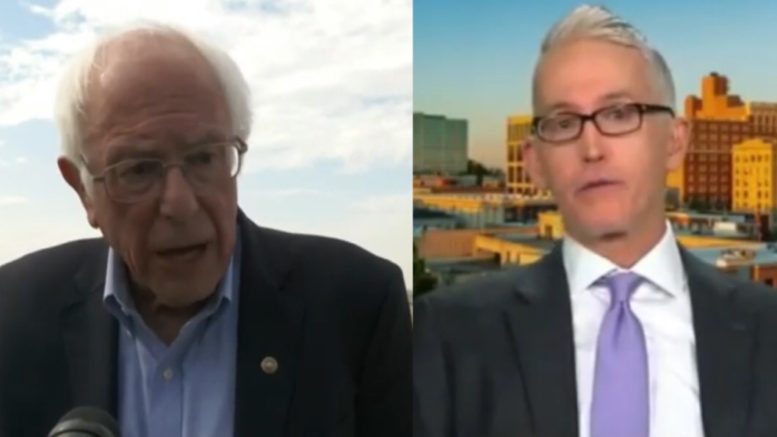 One day after The New Times released a report, which alleged that intelligence officials warned House lawmakers last week that Russia was interfering in the 2020 campaign to help President Trump get re-elected, The Washington Post reported on Friday that Russia is trying to help Democratic candidate Bernie Sanders’ campaign.

Sanders disavowed the alleged Russian efforts to help his campaign as The Washington Post reported that U.S. officials have determined Moscow is attempting to interfere in the Democratic primary race on his behalf.

According to the Post, officials have told the Sanders campaign that Russia is working to boost the socialist as part of an effort to meddle in the Democratic presidential primary. The story, citing people familiar with the matter, said President Trump and lawmakers on Capitol Hill have also been informed of the Russian attempts, as reported by Fox News.

“I don’t care, frankly, who [Russian President Vladimir] Putin wants to be president,” Sanders said in a statement Friday. “My message to Putin is clear: stay out of American elections, and as president, I will make sure that you do.”

“In 2016, Russia used Internet propaganda to sow division in our country, and my understanding is that they are doing it again in 2020,” Sanders said. “Some of the ugly stuff on the Internet attributed to our campaign may well not be coming from real supporters.”

Kremlin spokesman Dmitry Peskov said Friday that the newest allegations are “paranoid reports that, unfortunately, there will be more and more of as we get closer to the elections [in the U.S.]. Of course, they have nothing to do with the truth,” as per by Fox News. (Continued Below)

Fox News’ host Neil Cavuto read another statement from Bernie Sanders who said of Russia: “Unlike Donald Trump, I do not consider Vladimir Putin a good friend. He’s an autocratic thug who’s attempting to destroy democracy and crush dissent in Russia. Let’s be clear, the Russians want to undermine America’s democracy by dividing us up. Unlike the current president, I stand firmly against their efforts.”

“Do you think the president should personally get in front of this and stop those efforts?” Cavuto asked Gowdy on Friday.

“I think the intelligence community should do a really good job of briefing the president on what their evidence is. The reason you and I are talking about this now is because, a House Democrat leaked to The New York Times, an assessment made by the intelligence community. When I hear the word assessment, Neil, that’s just a long way of saying ‘opinion’. That is their opinion,” Gowdy explained. (Video Below)

“But [Trump’s] the Commander in Chief. You need to go convince him. You go take Mike Pompeo and whoever else he has confidence in, convince him that Russia is trying to mess with this country. And I bet you will get a forceful response,” Gowdy said. “But it can’t come from The New York Times. It’s got to come from somebody that he actually trusts. It can’t come from Schiff leaking to The New York Times. Send the head of the CIA over.”

Meanwhile, on Friday morning, President Trump took to Twitter after The New York Times alleged that Russia is trying to help Trump, calling it “Hoax number 7!”

Another misinformation campaign is being launched by Democrats in Congress saying that Russia prefers me to any of the Do Nothing Democrat candidates who still have been unable to, after two weeks, count their votes in Iowa. Hoax number 7!

“Source familiar w/house briefing @CBSNews says briefers pressed for evidence to back up claims Russia ‘trying to help POTUS in 2020.’ Asked if there was signals intelligence – such as phone intercepts or ‘SIGINT’ – to back up claims, source said briefers had none to offer #DNI”

Source familiar w/house briefing @CBSNews says briefers pressed for evidence to back up claims Russia “trying to help POTUS in 2020.” Asked if there was signals intelligence – such as phone intercepts or “SIGINT” – to back up claims, source said briefers had none to offer #DNI

While Trey Gowdy believes that Rep. Adam Schiff leaked the information, Schiff wrote on Twitter Thursday, shortly after the report came out alleging Russia is trying to help Trump in 2020:

We count on the intelligence community to inform Congress of any threat of foreign interference in our elections.

If reports are true and the President is interfering with that, he is again jeopardizing our efforts to stop foreign meddling.

Exactly as we warned he would do. https://t.co/viSBlnA1nb

We leave you with Hillary Clinton, who had paid for the Steele dossier, which was Russian disinformation.

Putin’s Puppet is at it again, taking Russian help for himself.

He knows he can’t win without it. And we can’t let it happen. https://t.co/10Z2YIipOI