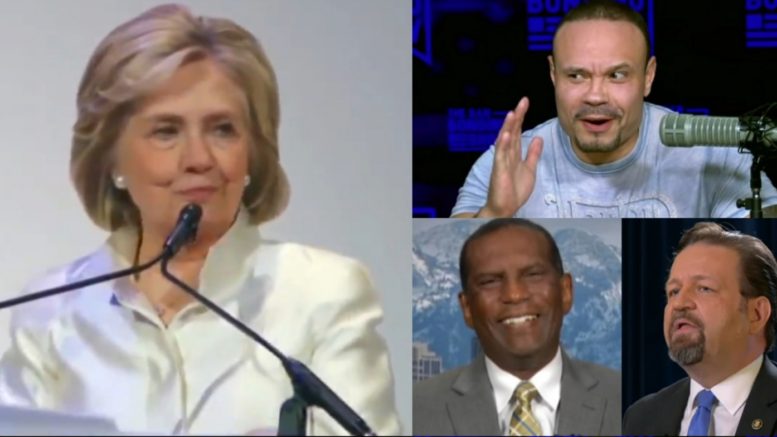 On Friday, Hillary Clinton suggested President Trump is “Putin’s puppet” and he can’t win the 2020 election without help from Russia.

The remarks from Hillary came in wake of reports that President Trump is replacing acting director of national intelligence Joesph Maguire, which coincided with news of Maguire’s decision to brief to lawmakers, including Adam Schiff, on Russia’s alleged interference in the 2020 election.

The New York Times reported that representatives on both sides of the aisle were warned by intel officials that Russia is trying to interfere in both the  Democratic primaries and the general election. The briefing is believed to have “angered” President Trump, who berated acting director of national intelligence Joseph Maguire over his decision to hold the briefing in the first place, and he complained that Democrats would use the information against him, according to the New York Times.

As per the NYT: “On Wednesday, the president announced that he was replacing Mr. Maguire with Richard Grenell, the ambassador to Germany and an aggressively vocal Trump supporter. And though some current and former officials speculated that the briefing might have played a role in that move, two administration officials said the timing was coincidental. ”

In response to the news, Hillary tweeted, “Putin’s Puppet is at it again, taking Russian help for himself.”

“He knows he can’t win without it. And we can’t let it happen,” she added. See Below

Political commentator Dan Bongino and others blasted Hillary after seeing her remarks.

“This is a broken woman. A life failure desperate to reclaim lost glory that never existed,” Bongino said in his reply to Hillary. “She’s an awful person, an awful politician, and a stain on our country who history books will eviscerate. Her peerless level of corruption is the only remarkable thing about her.” See Below

This is a broken woman. A life failure desperate to reclaim lost glory that never existed. She’s an awful person, an awful politician, and a stain on our country who history books will eviscerate. Her peerless level of corruption is the only remarkable thing about her. 👇🏻 https://t.co/YIdzGIUs1Y

Here are some more reactions to Hillary’s remarks:

Translation: “I’m never going to get over losing the 2016 presidential election.” So pathetic.

Thank you for staying so active on Twitter. Everytime I see a new tweet, I remember how thankful I am we have @realDonaldTrump as our President and not you. Your continual bitter propaganda peddling just helps keep the #Deplorables motivated.

Your ‘Russia’ bullshit is ludicrous

Why would Russia want Trump to be re-elected?

What part of him giving defensive weapons to Poland/Ukraine, rebuilding our military, going all in on energy, building up NATO, or killing Solemeini, do you think makes Putin’s happy?

Oh look! Hillary Clinton is spreading disinformation to divide us… just like the Russians wanted. https://t.co/OcGSUcNrmb

Trump is such a "Putin Puppet" that after YEARS of investigations, including your boy Mueller, NO COLLUSION was found between the Russian Government and his campaign.

All Democrats have now is conspiracy theories to try to beat Trump… because they sure don't have the candidates to do it.

In a video that was posted on Friday, Hillary told a crowd, “I made more money than my husband, a common experience throughout our marriage.”

We leave you with James Woods’s response to that:

Well, yeah, because you’d drink the blood of wild goats for a nickel and he was too busy boinking anything that moved. The math was in your favor. https://t.co/2MWHY81wUr