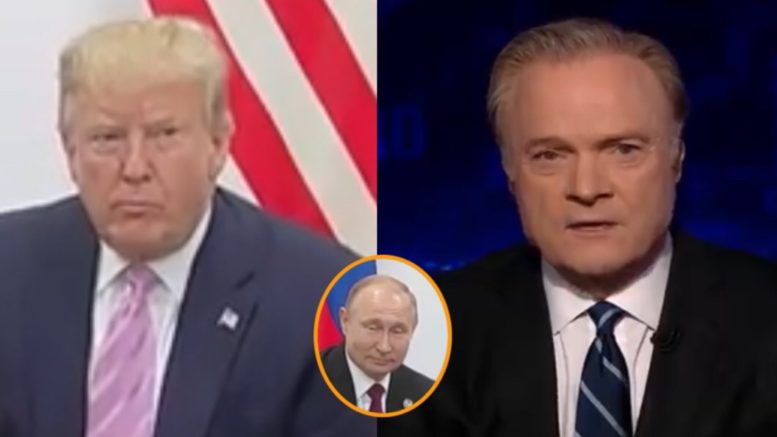 President Trump may have fully broken some of the hosts at MSNBC. Specifically, host Lawrence O’Donnell, when he tried to persuade his audience Thursday by alleging that President Trump is a “Russian operative”.

“The president is a Russian operative,” Lawrence O’Donnell declared. “That sounds like the description of a bad Hollywood screenplay, but it is real, and it is Vladimir Putin’s greatest achievement, decades after America’s victory in the Cold War and the collapse of the Soviet Union.”

O’Donnell called it one of those “shocking news days”, then proceeded to stamp the Trump administration as being better labeled as the “Trump-Putin regime.”

“It’s one of those breaking news situations that suddenly makes recent news make more sense– like the recent news that Donald Trump has outdone himself, by appointing one of the most ridiculous, incompetent stooges in the Trump administration to be nothing less than the Acting Director of National Intelligence,” the MSNBC host said, referring to Richard Grenell. (Continued Below)

Lawerence O’Donnell then claimed President Trump would have nominated his now-former Acting Director of National Intelligence, Joseph Maguire, “until Vladimir Putin showed Donald Trump that he needed an even more incompetent director of national intelligence because Vladimir Putin is working hard to reelect his favorite president of the United States in history.”

“The president is a Russian operative. That sounds like the description of a bad Hollywood screenplay, but it is real, and it is Vladimir Putin’s greatest achievement.” pic.twitter.com/22uawDQ6dh

Rep. Lee Zeldin (R-NY) took note of the MSNBC host’s claims and called out Lawrence O’Donnell for his “highly irresponsible false reporting”, saying he is “enthusiastically dumbing down his audience”.

Exhibit A: There may not be anyone in the US govt who has done more to stop Kremlin’s Nord Stream 2 project than @RichardGrenell. https://t.co/Kf4f293uZM