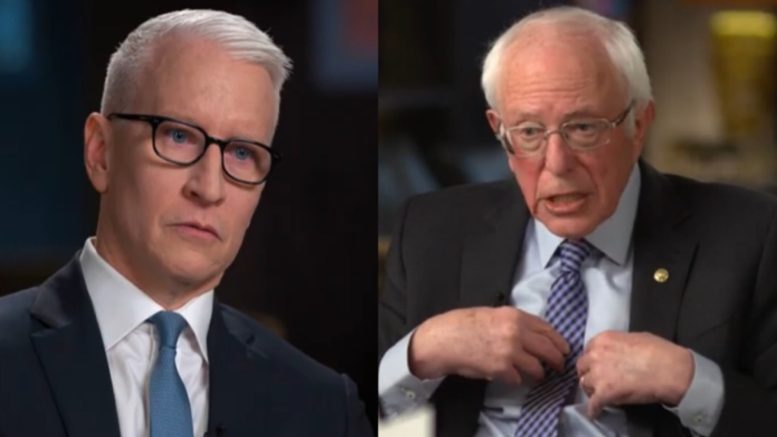 Senator Bernie Sanders (I-VT) spoke with Anderson Cooper during a Sunday CBS “60 Minutes” interview and was asked “how much” would his agenda cost if it was passed into law.

There’s profound skepticism in Congress about Sanders’ ability to get his agenda passed. Two-thirds of Democrats in the Senate have not signed on to Medicare for All, which would cost an estimated $30 trillion to $40 trillion over ten years. And that’s just one of Bernie Sanders’ many proposals. There’s also free public college, cancellation of all student debt, a federal job guarantee, and a Green New Deal to rapidly reduce carbon emissions, CBS News reported.

Anderson Cooper asked the democratic socialist presidential candidate, “How much will that cost?”

Bernie Sanders responded: “Obviously, those are expensive propositions, but we have done our best on issue after issue– in paying for them.”

“Do you know how all– how much though? I mean, do you have a price tag for– for all of this?” Cooper asked.

“We do. I mean, you know, and the price tag is– it will be substantially less than letting the current system go. I think it’s about $30 trillion,” Sanders said. (Continued Below)

“Do you have– a price tag for all of these things?” Cooper pressed Sanders.

No, I don’t. We try to– no, you mentioned making public colleges and universities tuition-free and canceling all student debt, that’s correct. That’s what I want to do. We pay for that through a modest tax on Wall Street speculation,” Sanders responded. (Video Below)

Taxes on corporations and billionaires are the primary options he’s proposed. But to finance Medicare for All, middle-class families would also pay an additional 4% tax on their income over $29,000. Sanders says they’ll end up saving money because they won’t have to pay premiums, co-pays, or deductibles. But under Medicare for All, nearly 160 million Americans will have to give up their private health insurance, CBS News reported.

The full interview can be watched HERE.

Bernie Sanders on if he knows how much his socialist agenda will cost: “no, I don’t”https://t.co/NKDkWKfc9J pic.twitter.com/V9vB0At0rt

Bernie Sanders was also confronted for making millions of dollars: