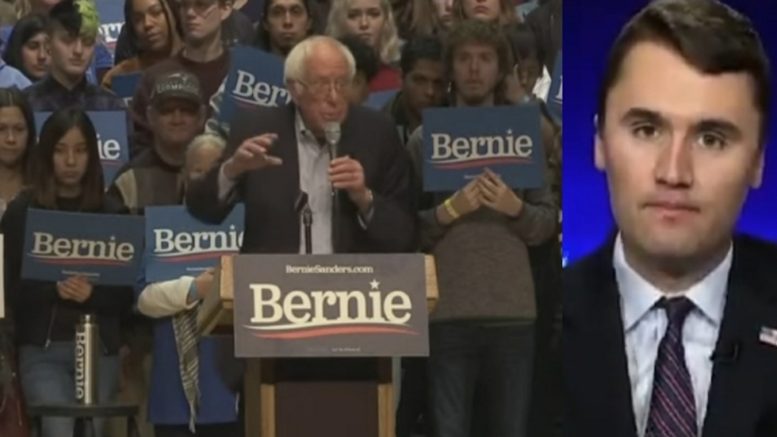 Kirk’s explanation came while reacting to Bernie’s decisive victory in the Nevada caucus.

Judge Jeanine asked “Why is it that young people on campuses think that socialism isn’t so bad?”

“We have not taught gratitude of our country to the next generation. When you’re not grateful for something, why on Earth would you want to conserve it?” he asked.

“It makes sense to want to start a revolution and just topple the entire society,” Mr. Kirk continued. “And if you listen carefully to what Senator Sanders says when he talks about, ‘We need widespread justice and we are going to change this country’ — that is what he has said word for word.”

Related Article: Bernie Claims ‘Human Solidarity’ Is The Only Way To Defeat Trump, Crenshaw Levels Him: “That’s Socialism, Not ‘Solidarity’”

When asked to explain what ‘widespread justice’ is, Charlie said, “It’s not blind justice like you have fought for, so terrific. Instead he goes justice by justice saying, ‘We need social justice. We need racial justice, environmental justice.’ Do you know what that means? He wants to topple our society and deconstruct everything that works. That’s what that means.”

“[Bernie Sanders] uses the term ‘justice’ and he misrepresents it personally to try to get people to support him. Justice should be blind. That is rule number one,” Charlie proclaimed. “But he does not believe that. He believes in impartial justice, almost a revenge campaign to deconstruct our country from within because he is not grateful to be an American — he is not. And nothing he represents, represents the gratitude of our country.” Video Below

.@charliekirk11 joined me to break down why Bernie Sanders is surging in the polls and why he is doing so well with the younger voters, take a look: pic.twitter.com/ldbDNdNyZ1