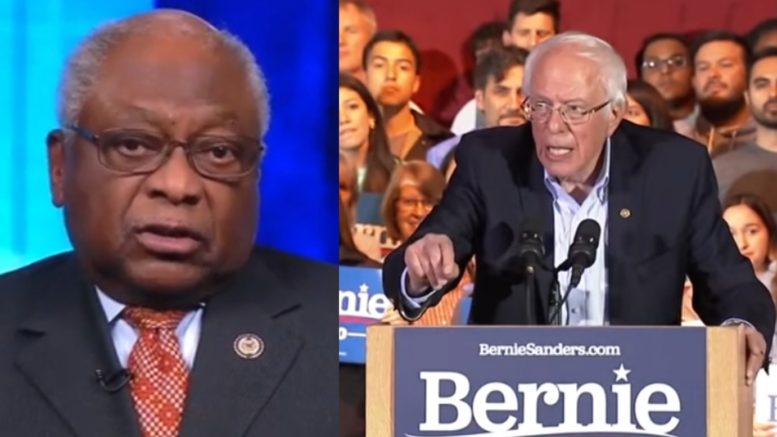 The rise of Bernie Sanders in the Democratic primaries is not sitting well with many Democrats, as some feel the prospects of Sanders as the nominee would create more harm than good for the party.

House Majority Whip James Clyburn (D-SC) weighed in on the situation while appearing on ABS’s This Week with George Stephanopoulos.

Stephanopoulos asked, “If [Bernie Sanders] is the nominee, do you think it could put the House majority in danger?”

Clyburn replied, “A lot of people think so, do believe it will be an extra burden for us to have to carry it.”

He then went on to mention that South Carolinians in the state he represents are “pretty leery about that title ‘socialist’.”

“And so, I think that would be a real burden for us in these states or congressional districts that we have to do well in,” Clyburn said. Video Below

Related Article: Sarah Sanders Warns Americans On The Possibility Of Bernie Being Dems Nominee: “Our Very Freedom Is At Stake”

“If you look at how well we did the last time, and look at the congressional districts, these were not liberal or what you might call progressive districts,” he continued. “These are basically moderate and conservative districts that we did well in.”

“And in those districts, it’s going to be tough to hold on to these jobs if you have to make the case for accepting a self-proclaimed Democratic-Socialist,” Clyburn declared. Video Below