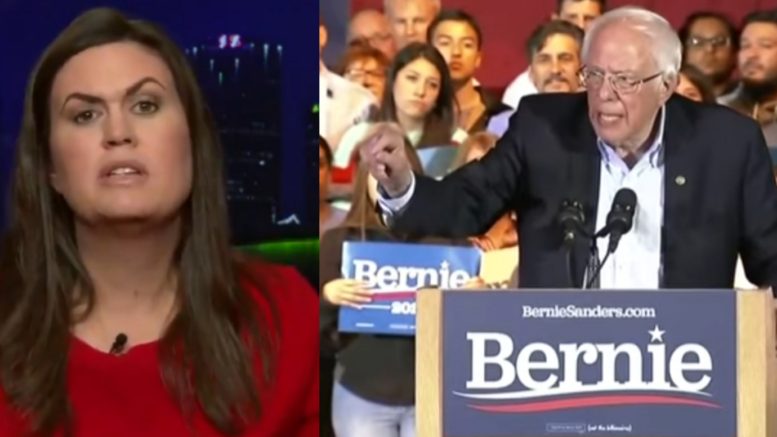 On Saturday night, Sarah Sanders dropped a warning to Americans over the possibility of Bernie Sanders being the Democrat nominee for President, and that “the way of life and our very freedom is at stake.”

Sanders made the remarks while discussing Sanders’ clear and decisive win in the Nevada with Judge Jeanine Pirro.

Judge Jeanine asked, “Is [Bernie Sanders] on his way to grabbing this nomination?”

Sarah replied, “Absolutely, between Bloomberg’s disastrous performance at the debate this week and Bernie winning tonight in Nevada — and not just winning, but a big win.”

“I think he is looking like the presumptive Democrat nominee at this point,” Sanders declared. “He’s certainly moving in that direction and, I think, Republicans have to be extremely careful. We can take nothing for granted.”

Related Article: Bernie Sanders: All Of Our People Including ‘The Undocumented’ Are ‘Entitled’ To Government Benefits

Sarah continued, “At this point, the stakes have been literally never been higher. If crazy socialist Bernie Sanders is the Democrat nominee, as he is well on track to be, literally the way of life and our very freedom is at stake at the election in November.”

“And Republicans have to come out in full-force and make sure that they get Donald Trump re-elected,” she concluded. Video Below

“He is the presumptive nominee at this point…he seems to be the candidate that has the most excitement and enthusiasm,” Former White House Press Secretary and Fox News Contributor @SarahHuckabee reacts to Bernie Sanders’ win in Nevada. pic.twitter.com/89SXIlMnWb