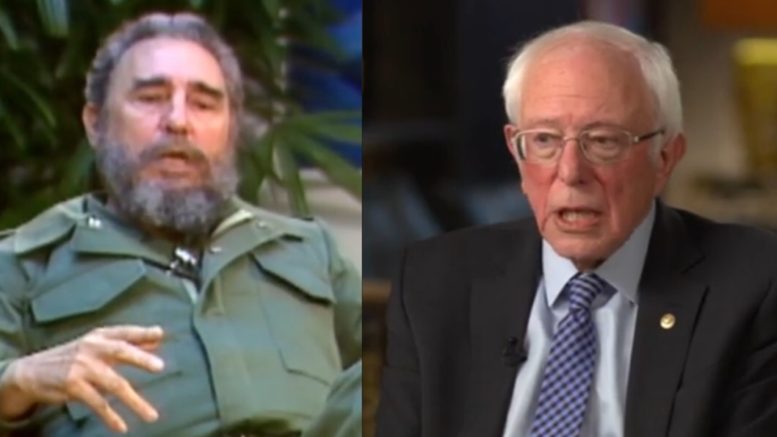 In a “60 Minutes” interview that aired Sunday night, Vermont Sen. Bernie Sanders doubled down on comments he made in the 1980s where he praised late Cuban dictator Fidel Castro. When asked about his current stance on Castro, the Democratic front-runner said he continues supporting aspects of his totalitarian regime, as reported by The Blaze.

Sanders told Anderson Cooper that “it’s unfair to simply say everything is bad” in Cuba, under the authoritarian rule of Castro.

“You know, when Fidel Castro came into office, you know what he did? He had a massive literacy program. Is that a bad thing? Even though Fidel Castro did it?” he added.

Senator Bernie Sanders’ remarks came in response to a question about comments he made in the 1980s explaining that the Cuban people did not rise up because of education and health care.

Host Anderson Cooper followed up by pointing out that a lot of dissidents were imprisoned in Cuba. (Continued Below)

(Related: Bernie Sanders On Whether He Knows How Much All Of His Plan Will Cost: “No, I Don’t”)

“That’s right. And we condemn that,” Sanders replied. “Unlike Donald Trump, let’s be clear, you want to– I do not think that Kim Jong Un is a good friend. I don’t trade love letters with a murdering dictator. Vladimir Putin, not a great friend of mine.”

While it is true that Castro implemented a reading program on the island after seizing power in a bloody revolution in 1959, Cuba’s literacy rate was already high for a Latin American nation at the time and its educational gains have been comparable to those of its peers in the years since, as reported by The Blaze. (Video Below)

Bernie Sanders defends his 1980s comments about Fidel Castro in an interview on 60 Minutes. https://t.co/ySqvQKoiBU pic.twitter.com/lTwuXWp9sA

CNN’s John Avlon: “This is to use a phrase of the progressive left: ‘problematic'”.

The Castro regime murdered and jailed dissidents, and caused unspeakable harm to too many South Florida families. To this day, it remains an authoritarian regime that oppresses its people, subverts the free press, and stifles a free society.

Former United States Ambassador to the United Nations, Nikki Haley, said that Sanders is not going to AIPAC, and told him to “go back to defending Castro and socialist dictators”.

The American Israel Public Affairs Committee is a lobbying group that advocates pro-Israel policies to the Congress and Executive Branch of the United States, as per Wikipedia.

Bernie Sanders announces he is not going to @AIPAC. To be clear, has never attended and has no clue what the organization is about or what it stands for. Go back to defending Castro and socialist dictators. We will go back to defending peace, democracy, and our ally Israel.

Chad Pergram, a congressional correspondent for Fox News, noted that House Minority leader Kevin McCarthy (R-CA) said of the Democratic Party: “This is a socialist Democratic Party that thinks Fidel Castro is a good person.”

(Related: Bernie Sanders: All Of Our People Including ‘The Undocumented’ Are ‘Entitled’ To ‘Basic Human Rights’)