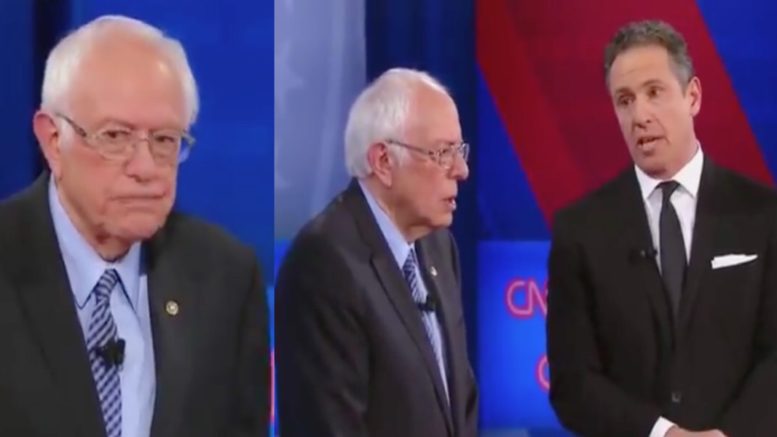 Swamp Drain reported on Bernie Sanders’ “60 Minutes” interview that aired Sunday night pertaining to comments he had made in the 1980s, in which the Vermont Senator had praised late Cuban dictator Fidel Castro. Sanders had told Anderson Cooper in his interview that “it’s unfair to simply say everything is bad” in Cuba, under the authoritarian rule of Castro.

During a CNN Town Hall on Monday in Charleston, South Carolina, Sanders doubled down on his Castro remarks, telling CNN’s Chris Cuomo that “truth is truth”, despite facing criticism.

“You said on 60 Minutes this weekend, ‘It is unfair to simply say everything is bad with the way Fidel Castro ruled in Cuba’. Now, Democrat members of Congress, who represent Cuban Americas in Florida– obviously you gotta win there, they’re attacking your comment as ‘absolutely unacceptable’- singing the praises of a murderous tyrant’. Response?” Chris Cuomo asked Senator Sanders.

“The response was when Fidel Castro first came to power, which was when? 59′? You know what he did? He initiated a major literacy program– it was a lot of folks in Cuba at that point, who were illiterate. And he formed the literacy brigade … and they went out and helped people learn to read and write,” Sanders said.

“You know what? I think people teaching people to read and write is a good thing,” the Vermont Senator doubled down. “I have been extremely consistent and critical of all authoritarian regimes all over the world, including Cuba, including Nicaragua, including Saudi Arabia, including China, including Russia. I happen to believe in democracy, not authoritarianism.”

“You can take China as another example. But can anyone deny they are an authoritarian country–becoming more and more authoritarian. But can anyone deny, I mean the facts are clear that they’ve taken more people out of extreme poverty than any country in history? Do I get criticized for saying that? That’s the truth. So that is the facts,” Sanders added. (Continued Below)

(Related: Bernie Sanders: All Of Our People Including ‘The Undocumented’ Are ‘Entitled’ To ‘Basic Human Rights’)

When CNN anchor Chris Cuomo echoed critics who said you don’t give Castro a “pat on the back for anything,” Sanders defended his stance, saying “truth is truth,” which was welcomed by applause from the South Carolina audience.

“Truth is truth. Now if you want to disagree with me– if somebody wants to say that– and by the way all of those congresspeople that you mentioned, it just so happens– to be supporting other candidates, just accidentally, no doubt, coincidentally,” Sanders said by deflecting. “But you know, the truth is the truth. And that’s what happened in the first years of the Castro regime.” (Video Below)

Why is he so obsessed with defending Castro’s Cuba just because people learned how to read and write? pic.twitter.com/UdytwqIMBW

The Castro regime murdered and jailed dissidents, and caused unspeakable harm to too many South Florida families. To this day, it remains an authoritarian regime that oppresses its people, subverts the free press, and stifles a free society.

(Related: Bernie Sanders On Whether He Knows How Much All Of His Plan Will Cost: “No, I Don’t”)