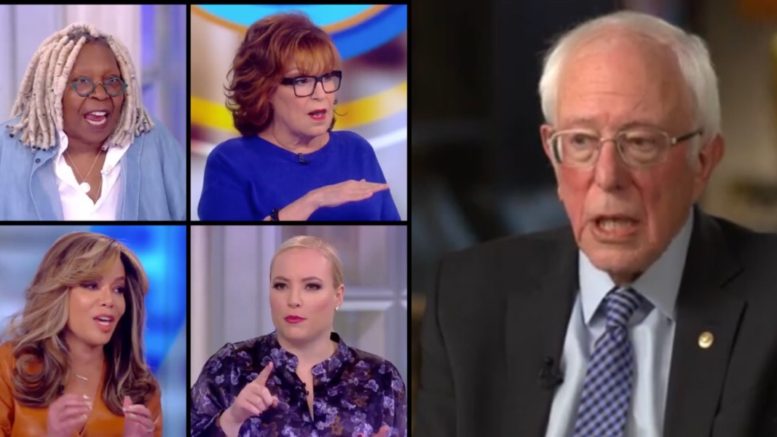 Swamp Drain reported on Bernie Sanders’ “60 Minutes” interview that aired Sunday night pertaining to comments he had made in the 1980s, in which the Vermont Senator had praised late Cuban dictator Fidel Castro. Sanders had told Anderson Cooper in his interview that “it’s unfair to simply say everything is bad” in Cuba, under the authoritarian rule of Castro.

During a CNN Town Hall on Monday in Charleston, South Carolina, Sanders doubled down on his Castro remarks, telling CNN’s Chris Cuomo that “truth is truth”, despite facing criticism. The women of ABC’s “The View”, sounded off over Sanders’s remarks on Tuesday’s airing.

After playing a clip of Senator Bernie Sanders’ comments about Fidel Castro, co-host Whoopi Goldberg asked, “So what is he saying?”

“What he should be saying is yes, they learned to read, but it’s an oppressive dictatorship that has zero percent growth, the people have no mobility there– that 40% of the professions are leaving the island. Doctors are leaving in droves, [be]cause there’s nowhere to go there,” co-host Joy Behar said.

She admitted that she went to Cuba 3 or 4 years ago expressing, “I don’t think I’ll go anymore,” adding that, “The quality of life is terrible.”

“That is not going to do well in Florida, a swing state for that Latino contingent,” Hostin said. “They are not going to forgive him for this position.”

McCain insisted that Sanders offering praise of Castro or Venezuelan leader Nicolas Maduro is “no different than saying Hitler was a good orator”, adding “It’s that insane. It’s that bat-blank insane!” (Continued Below)

Behar interjected toward the end of the conversation when McCain reiterated: “But to not care about Florida and Cubans in Florida, is particularly…”

“But [Sanders] said they were bad guys,” Behar said defending Sanders. “He said Fidel was a bad guy. All he was saying was there was this one thing that they did.”

Whoopi stopped Behar in her tracks: “No, no, there’s no way around that. This is as bad as you know who saying, ‘There was good people on both sides’. It’s the same thing. … Once you start saying, ‘Well, you know Hitler wasn’t so bad because he…”, to which Behar backtracked to agree with her. (Video Below)

Whoopi Goldberg was referencing President Trump’s remarks on Charlottesville when he had said in August 2017: “You had some very bad people in that group. But you also had people that were very fine people on both sides.”

“You had people in that group that were there to protest the taking down of, to them, a very, very important statue and the renaming of a park from Robert E. Lee to another name. … I’m not talking about the neo-Nazis and white nationalists, because they should be condemned totally,” the president stated firmly. [Emphasis added].

“The View” sounds off on Sen. Bernie Sanders’ Castro remarks:

(Related: Joe Biden To ‘The View’: I Can Hardly Wait To Get President Trump On The Debate Stage)