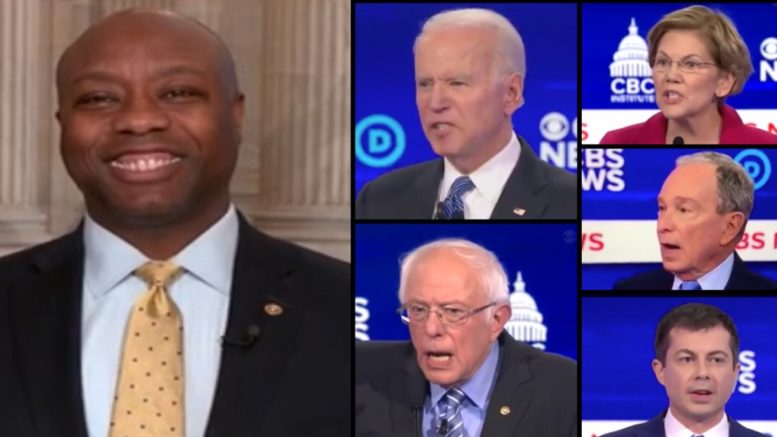 Senator Tim Scott (R-SC) spoke with “Fox & Friends” Wednesday, where he weighed in on the Democratic presidential debate that was held in his home state of South Carolina on Tuesday night, three days ahead of the Palmetto State’s Democratic primary. In December, a judge upheld the South Carolina Republican Party’s decision not to hold a 2020 presidential primary.

Senator Scott indicated how Tuesday’s Democratic debate was “embarrassing” and a “hot mess” for the Democratic Party, proclaiming President Donald Trump as the winner.

“I thought it was a hot mess,” Senator Tim Scott expressed. “It was so embarrassing for the Democrat Party. No one on that stage was presidential, and frankly, the winner of the debate last night was simply President Donald Trump.”

“Listen to Amy Klobuchar’s praising of the First Step Act and then watch to how they denigrated each other. Steyer owned personal prisons– private prisons. They talked about [Joe] Biden passing the 1990s climate bill. They talked about [Mike] Bloomberg. They bombed Bloomberg on the stop-and-frisk policies,” the South Carolina Senator explained.

“What you saw on the stage yesterday was as if there were no white folks watching 7 white candidates talking about black people. It was the most remarkable performance. I can’t imagine that on our stage. I would be embarrassed to have a conversation specifically about one race,” Senator Scott proclaimed. (Continued Below)

“Because his policies are percolating at the right time. It is really hard to deny the success of this administration,” the South Carolina Senator explained. (Video Below)

(Related: DeAnna Lorraine Explains Why She Has Decided To ‘Fight’ Against Pelosi: “She’s The Embodiment Of Cultural Rot”)