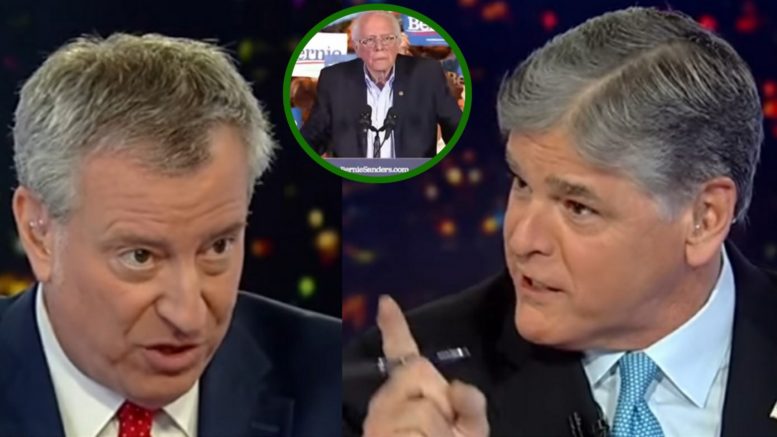 On Wednesday, New York Mayor Bill de Blasio joined Sean Hannity for an interview that primarily focused on the the candidacy of former NY mayor Michael Bloomberg and Senator Bernie Sanders, who de Blasio has endorsed for president.

Both Hannity and de Blasio appeared to be in agreement when it came to some of the controversy surrounding Bloomberg, but the two began to spar when the topic shifted to Sen. Sanders.

Related Article: Myrtle Beach Bernie Crowd Cheers As Mayor Asks: “How Does It Feel To Be…A Bunch Of Socialists?

When pressed on the controversy surrounding the candidacy of Sanders, de Blasio claimed Bernie is “about working people.”

Hannity quickly responded: “He’s gonna tax people, by his own admission, that make over $29,000 — they’re gonna get slapped with a 4% tax increase to pay for MediCare for all. He’s going to high-income earners. They’re gonna see a top federal rate of 52%, a hike of 15%. Capital gains he’s gonna raise. He wants a wealth tax. The death tax, 77%.”

He continued, “You tax people, they pay their taxes. You take another bite at the apple with the wealth tax, if you were dumb enough to save money. And then when you die, you gotta give 90% of your wealth?” Video Below

Hannity replied, “No, you should have all of that money. We should just hand it over to the you — all we make.”

Then as the two sparred over how much is a “fair” amount for people to be taxes, Hannity finished de Blasio off by saying, “So, you want to legalize stealing, and you want to confiscate it, and then you wanna give it away so you can build your power.” Video Below