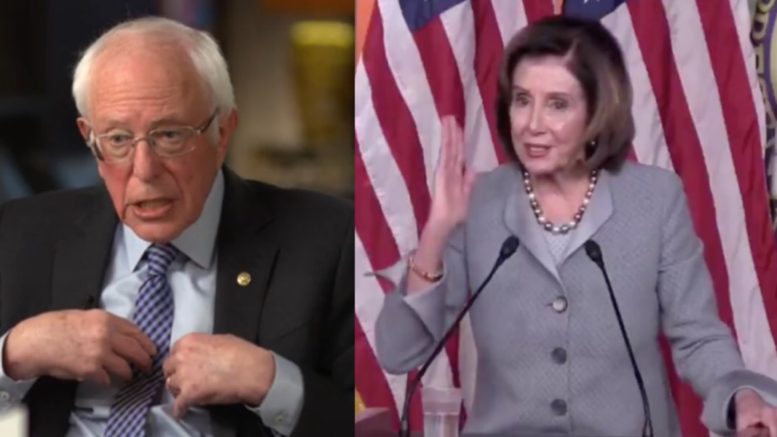 During a press conference Thursday, House Speaker Nancy Pelosi (D-CA) told reporters that Democrats “are all unified whoever the nominee is of our party.”

When asked specifically about Senator Bernie Sanders (I-VT), Pelosi said that she will support the Vermont Senator if he wins the Democratic presidential nomination.

“Our responsibility is to win the House,” Speaker Pelosi said Thursday. “We have demonstrated that … by owning the ground with our mobilization, not yielding one grain of sand by a message of bold, progressive agenda was mainstream and nonmenacing and having the money– the ‘m’s’, to advance our cause of our message and ground game.”

“My responsibility to make sure those that we elect last time, return to Congress, keep the majority, and add to our numbers,” she continued.

“The presidential is its own race and I don’t– contrary to what you may be hearing or writing, we are not getting– we are all unified,” Speaker Pelosi claimed. “Whoever the nominee is of our party, we will wholeheartedly support. Our gospel is one of unity, unity, unity.” [Emphasis added].

“When we win, we’ll put everything on the table and have a discussion to see where we go from here. But it’s not about causing any division as we go forward. Unity, unity, unity. Whoever our nominee is, we will support with respect for his or her positions, hopefully with our positions as well,” she later reiterated. (Continued Below)

Democratic presidential candidate Sen. Bernie Sanders (I-VT) during a Sunday interview on CBS’s “60 Minutes”, said it would be “unfair to simply say everything” under Castro was bad, pointing to the high literacy rate when the Cuban leader was in power. During a CNN Town Hall on Monday in Charleston, South Carolina, Sanders doubled down on his Castro remarks, telling CNN’s Chris Cuomo that “truth is truth”, despite facing criticism.

The resolution was brought on the House floor Thursday, and Democratic lawmakers blocked the GOP resolution condemning Senator Sanders’ flattering comments about the Castro regime. The vote was 224-189 that fell along party lines. (Video Below)

Speaker Pelosi: "We are all unified whoever the nominee is of our party." pic.twitter.com/oLZS5ODMe9

Speaker Nancy Pelosi says she will support the agenda of Bernie Sanders if he becomes the nominee.

The Democratic Party is about to mainstream Socialism in the United States.
pic.twitter.com/JpqHl5qm1j

Congressional Republican candidate DeAnna Lorraine is running against Rep. Nancy Pelosi (D-CA) in California’s 12th District, and she is trying to defeat the liberal House Speaker.

Pelosi is up for reelection and on the ballot in the primary on March 3, 2020.

.@SPEAKERPELOSI just indicated that she would be 100% comfortable with @BernieSanders as the POTUS.

Bernie praises dictators like Castro, has a campaign slogan #NotMeUs which harkens back to Communist propaganda & has no clue how he'd pay for his plans.